I've been meaning to do an Artillery review for quite a while, quite easily six-months, in fact. Artillery are what I'd consider a "miscellaneous" thrash-band, and I can't quite fit them into any schema - nonetheless, they're a good-listen, and "By Inheritance" is widely considered one of their classic albums. A good place to begin, I think. 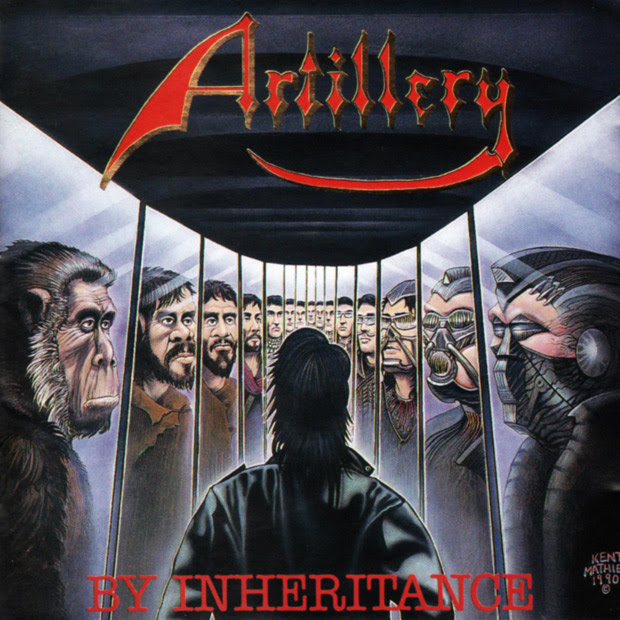 By Inheritance is made up of a mixture of melodic thrash metal, which seems to border on speed metal in many points. Falsetto vocals and memorable melodies really dominate the songs, but at the same time manage not to detract from the aggression - It's still very much a thrash album at heart, and possesses the rough-edges which are vital for it, unlike many of the "only-just..." thrash bands I've listened to. This presents a very interesting mixture of melody and energy which is unlike anything else I've heard. There plenty of bands which spring to mind a bit when listening, but it's exactly that - a bit. Nothing I've heard is massively similar, and the uniqueness is probably a big explaining factor in the reason that I can't quite place Artillery's sound into any broader category. The riffs are very solid, crisp and tightly played, and laced thoroughly with melodies which are epic, catchy and syrupy smooth, with a hint of speed metal, or perhaps even power metal thrown in. I found it pleasing that the music, while sounding in many ways quintessentially thrashy, also feels like it's coming from the style at an entirely different angle to most of the bands in it.

After a while of listening to the album, it suddenly becomes noticeable that the songs are not just tight, but extremely technical as well. This technical prowess, however, comes with a modesty - it's all done for the sake of making the songs sound good, and that makes it all the more enjoyable, sounding neither over-the-top or over-complex, and all the better for it. The songs do have a lot going on in them, but they still flow very nicely. The solos are blistering, and really stand out as accomplished and impressive, as does the vast majority of the guitar-work throughout the album; There isn't, I'd venture, a single song which isn't in some way as impressive as it is enjoyable. I tend to neglect vocals in my reviews, but I can certainly praise them on this album, being both acidic and vicious sounding in the fast-paced sections, but also astoundingly beautiful and soft in the quieter sections, which the band is prone to having, which are pockets of calmer beauty amongst the frenzied and oftentimes epic uptempo material.


Listening to some Artillery proved very much to be a refreshing decision on my part - I feel I've certainly finally listened to something which now, I suspect I will listen to again in future. Thrash was my first love when it came to metal, and I'm glad to have discovered a part of it which I missed out upon.