"I really ought to review that new Jute Gyte album" I thought to myself about a week ago, followed by "oh, he's made another one!". It's a testament to the man behind the project, Adam Kalmbach's, work ethic and impressive creative output, releasing many albums per year, some of them black-metal, some of them not. Isolation is the first black-metal album by Jute Gyte so far in 2012, and carries on where his previous four black-metal albums left off, much to the enthusiasm of the project's growing underground following. 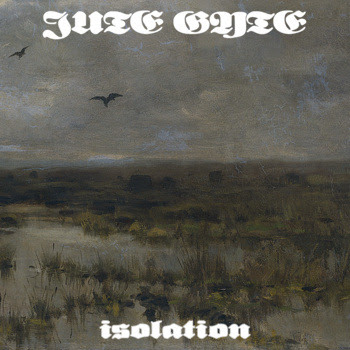 My knowledge of musical theory may be sketchy at best, but Kalmbach's evidently isn't - The man knows what he's doing, and the album is, as accustomed, packed with a lot of musical wizardry which very much causes it to stand out from just about everything else. The Bandcamp page proclaims that the music is full of things which I've never even heard of, let alone am capable of recognising, but even a musical-cretin like myself can tell that the album, and Jute Gyte's black-metal in general, for that matter, is unique and fascinating. The signature desolate atmosphere which Jute Gyte mastered is ever present, and the guitar-sound is as caustic and hypnotic, but also seemingly more intricate and concentrated than the earlier records. This has the effect of making "Isolation" as thought-provoking, mind-melting and generally many-layered as the past albums, and then some. One of the things I always notice, and enjoy, about Jute Gyte albums is just how much there is going on - the songs are not only diverse, but work on several levels at once, some signatures of the projects style, other's novel and new. Isolation keeps all of the key features of Jute Gyte's sound, but also shows a steady development in sound and style which is pleasing to watch unfold, and it's very engaging that all of the albums sound a little bit different.

In what seems to be a custom, intentional or not, track four of the album, the title-track in this case, is ambient; relaxing but still enthralling, deep and rewarding to listen to. It offers a serene island in the harsh and wind-blown landscape of the rest of the album, and demonstrates Kalmbach's ability to work equally well with electronic elements. The drum-programming is also excellently done, and the drums keep the rhythm and decorate the music nicely. They sound a little inorganic and cold, but this is certainly something which they make up for with their other attributes, and most of the time they work together with the rest of the music, not against it. In terms of production, Jute Gyte's sound hit the nail on the head quite early on, and this album simply carries on that style - all of the layers are audible, with the full insanity and brilliance of the music laid-bare, designed to be heard. The harsh, slight background fuzz adds to the character and the dry, haunted atmosphere, and on the whole, the sphere of production and indeed tone are top-notch.

Like the albums before it, Isolation is a really unique album. As far as I know, literally no other black-metal band even comes close to sounding like them, and this certainly makes the music, impressive in it's own right, feel all the more special and visionary. Thinking-man's black metal, and very solid, at that.  Give it a listen, and pick up on the enjoyable and intangible qualities I neglected to adequately describe.