Curse, by English black-metal outfit Wodensthrone, is probably my most anticipated album of the year so far. Loss, the band's full length début is easily cemented among my top ten black-metal albums of all time, so naturally, I'm eager to find out if this album carries on the brilliance which the band have already established. Going by what people who have already had a chance to hear it have said, I'm in for a treat. 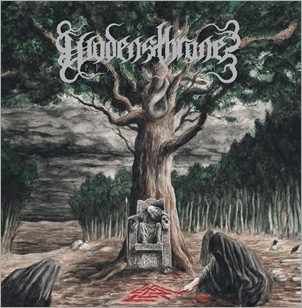 Things have changed a little since Wodensthrone last made an album. For starters, three years worth of development have come and gone in which the musicians in the band have toured, worked, and generally existed, and the consequence seems to be a more mature sounding album. The things which make Wodensthrone great are entirely still present, with vast, epic soundscapes of beautiful synth and intense black-metal atmosphere, but a little more refined, and flowing - Loss was beautiful, but Curse takes the same beauty and paints it in a slightly more even coat. The album seems to venture into slightly darker places than Loss, with songs like "The Great Darkness" being dark in more than just name - carrying a more grim atmosphere than anything from the previous album. It may sound superficial, but the artwork of the album really fits the tone - while Loss had a golden vision of a forest, in Curse, the sky is dark and brooding, and the music often reflects this, the songs sounding more warlike and often more angry. A lot of the music is still fantastically beautiful however, which is something that I hope the band never feel they should change. The diversity of atmosphere, however, really takes this album step beyond, and it feels more addictive and enrapturing than Loss felt when I listened to it at first.

The album has a lot more diversity vocally, too - Brunwulf, the vocalist who performed on Loss left the band in 2011, and as a result, the other members have split vocal duties between them. This adds a lot variety to the vocal dimension of the album - there are a few different styles of harsh vocal, and the occasional burst of harmonious clean voice. It's not really the vocals which make Wodensthrone for me personally, but I'll venture to say that they sound just as good, if not slightly better, in this album. The song-writing on Curse seems solid, sure-footed and confident.  I wondered how they'd manage to follow up the music of Loss, and it seems they've definitely managed to make something which rivals it in strength. I'll have to wait until Curse settles into my routine listening before I can decide which I prefer, but both albums are magnificent in their own right. One of the things I love from Loss, the magnificent and hauntingly beautiful tremolos, seem to have been expanded on in Curse, and there are several shimmering moments which immediately sent shivers down my spine -  the melodies which they summon are quite easily among my favourite by any band.


I can safely say that this album has most likely pushed Wodensthrone even further up my list of favourite bands. The sound is developed, matured, but also as beautiful as it has always been. I'm thoroughly impressed, and I'm glad that the band have managed to keep up with the quality of their début. If a three year gap between albums means that the albums are a good as this, then I'm happy to wait. It was well worth it.