Vektor are a young, and impressively skilled thrash outfit from the United-States. Their second album, "Black Future" hammered their name quite neatly into the map of 21st century thrash, and the wait for a follow up has been bedecked with it's fair share of anticipation and interest, especially when the album in question, "Outer Isolation" has the potential to be, for want of better words, something of a big-deal. 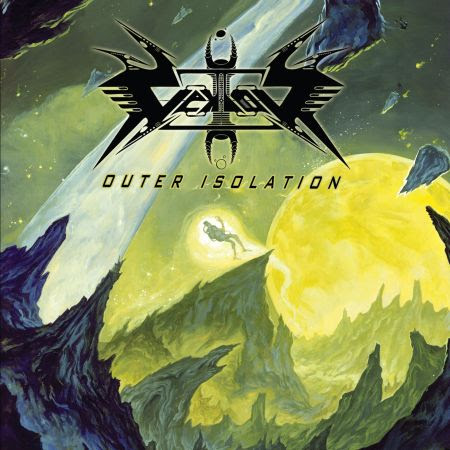 Carrying on in the bands science fiction, space and dystopia themed brand of very technical thrash, Outer Isolation is very much the logical step along from Black Future, and all of the main elements of the band's sound have remained intact; The distinct, shrieked vocals, and the absurd, breathtaking technicality, which exists at all tempos, which make you wonder how the band manage to play live at all, which, incidentally, they can do. Also remaining is the eerie and evil atmosphere which the band manage to always invoke. Often, thrash seems to be a style which is neutral, and it's feel is given directly in the lyrical themes - not so with Vektor; the music itself has an atmosphere attached to it, which too many thrash bands lack. The album seems a bit more accessible, too, the songs are a bit shorter, for starters, which is very useful considering that the typical Vektor song is such a maelstrom of complexity which takes quite some time to properly digest.

In what might be seen to be something of a brave move, the band have three tracks from their ambiguous, hard to find demo/debut album, and it's gotten a bit of mention from people anticipating the album. Personally, listening to the album once without looking at the track titles, I can happily say that there was no noticeable change in quality between the original material and the older stuff. After all, Black Future did the same, with the track "Destroying the Cosmos". This says something for Vektor's consistency - when material from an old demo can fit in nicely with material from their up-and-coming releases, it becomes quite apparent that the band hit the ground running, and haven't slowed down since. I'd tentatively say that I'd like to see a little bit of development, nothing drastic, when my time comes to review the album after this one, but until then, Vektor are thankfully lightyears away from developing any kind of "releasing more of the same" problem. That is to say, this album is not without differences - There's lot more work which doesn't rely on riffs; extended intros, and cleaner sections which feel like the seedlings of something which I could potentially foresee Vektor getting an excellent reputation for.

All things considered, Outer Isolation definitely feels enjoyable to listen to, and it's got all of the things I liked about Black Future. In a year of milestone releases by many of the younger thrash-bands out there, Vektor may well be leaving a mark much deeper than some. Despite the age of the thrash genre, the band are definitely bringing something new to the table.