I notice that I've reviewed a lot of thrash-bands recently. Something a bit different seemed in order, and fortunately, Savatage were there for the listening. Savatage are one of those bands that I should perhaps have had a listen to long ago, and I feel a bit incompetent for only just listening to them properly recently. The band play a range of styles, but this album is a melodic heavy metal, borderline power-metal affair, and all in all, sounds a damn fine album to introduce myself to Savatage with. 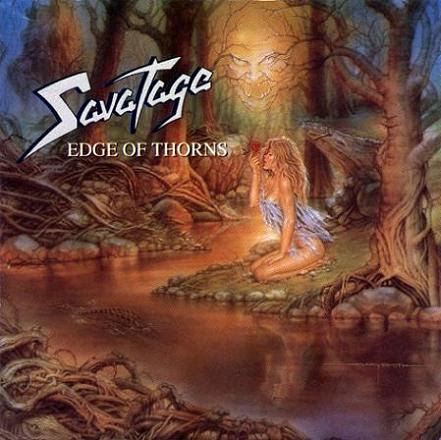 Within a few minutes of listening to the album, I was hit, as if by a gust of wind, by how powerful the music's vocals were, and how vocally dominated the band's sound was, which was made interesting by how much power the songs retained in spite of this - I find many vocally dominated bands to be a little feeble in terms of the energy in the music, especially in terms of rhythm, but it seems Savatage have the balance quite nicely in the bag - maybe while the vocals soar above, the instruments, like the ground below, are also huge and powerful. A lot about the album seems to be well blended - the production is very nicely done, with the leveling nigh-perfect, as far as my ears tell me. The blend of styles is interesting too - It's not quite power-metal, and it's not quite rock, but it certainly has the enjoyable features of both, in profusion. The virtuosic vocal edge, and guitar crunch of metal, but the attitude and occasional bluesy lick belonging very noticeably to rock.

Beauty seems to be the integral element of the record, as opposed to heaviness, virtuosity, or attitude, and it's quite a pleasing fact. The songs are evocative, and the lead-guitar and clean sections are genuinely intense and emotional. I've always enjoyed bands who manage to sound epic without using a great number of effects, and Savatage are certainly one of those - Guitar and vocals strong throughout, with an honest, organic epicness. The band aren't "heavy" in a way which is recognised greatly today, but it doesn't need to be to have a great impact - the music feels hugely intense without resorting to speed, or excessive layers of sound - making the music both down-to-earth, and incredibly epic at the same time. Whatever a well-done 80's ballad had, that's what Savatage seem to have latched onto, and, dare I say, improved upon.


I'll admit, I call albums "solid" quite a lot - but they are solid to varying degrees. This one fits into the highly scientific solidness-category of "very". It's one of those albums I wouldn't have listened to immediately, but at a friends recommendation, I listened, and I liked.