I encountered this band a few days ago, being promoted in a rather convoluted way by their drummer, who posted a live video of his drumming. I'm usually sceptical of bands which do things like this, but as I clicked past the live video onto the studio tracks, I was somewhat impressed with the bands brand of death/thrash, and decided to listen to their self-released debut, the titillatingly titled "Zombie Slaughterfest" 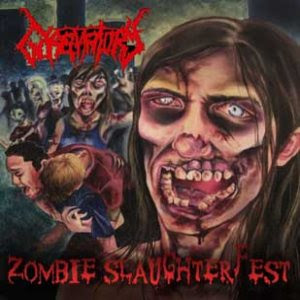 The thundering behemoth of thrashy goodness which arrived through my headphones was certainly of a high calibre, and was also catchy. I say thrashy because the mix of thrash and death-metal seems to lean that way - In the style of bands like Death, the sound is very much a thrashy one, with the same speed, aggression and distinguishing features, albeit augmented by brutal vocals, and a savage death metal intensity and deep guitar sound, and the cover of "Zombie Ritual" goes on to highlight this fact. The growled vocals go well with the gruff, oldschool sound of the album as a whole, as does the production, which is very early-death-metal, without compromising the coherence of the sound  too much. On top of this, the songs are quick, memorable, and to the point - which is, I'd guess, the best style to opt for with this style of death-metal. Like a fast punch to the face, as opposed to a lengthy, tiring bout, the songs are easy to absorb, generally lasting between two and four minutes, which is enough time to be interesting, and to get some technically impressive musicianship done, but not so long as to become stale to the ears.

Talking of technical, that's definitely something that the band are. Not so much in the "tech-death, prone to a lot of guitar wankery" way, but in a honest, "this is impressive, but we're only doing it because it sounds cool" kind of way - which is by far my preferred approach to technical playing in metal, and while the band may not be bringing much innovation to the old-school death-metal sound, it's pleasing to note that they're playing  it the right way, and the whole aesthetic of the album is a testament to this - the artwork and production values certainly give the impression that the album might have been unearthed from a late-eighties time-capsule; The band have certainly got the OSDM sound down-to-a-tee. I don't know death metal anything like as well as I know thrash or black metal, but I'd certainly venture to say that what this band is doing for death-metal is analogous with what bands like Warbringer and Evile are doing for thrash, or White Wizzard is doing for traditional-metal. Categorisation matters little, however - of it's own merit, "Zombie Slaughterfest" is good.


I have to say, this album seems like a very solid debut, and I was certainly impressed and pleasently suprised. I don't often happen upon bands of this calibre through following self-promoting forum posts, but this time, I found an exception. The name and album title may be toungue-in-cheek, but the band take the business of making metal deadly-seriously.