I'm sure I'm not the only person who looked at bagpipes and thought to myself  "they could work really well in metal." Proof of that fact is Skiltron, an Argentinian folk/power metal band who unleash a speedy bagpipe driven attack on the senses. Their third album, "The Highland Way" had been out for a while when it caught my attention, but now I'm giving it a listen. 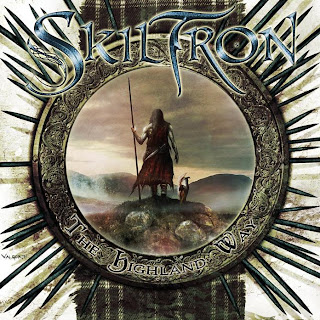 As far as I'm concerned, anything with bagpipes in it assumes a certain degree of epicness the moment it is played. When the music in question is metal, things can only get better. Being power metal, of the European school, the band make plenty of epic feel and high vocals, which combines well with the bagpipes, which come in at well timed moments, much as if they were used like an additional guitar, with synth also added to the mix, in standard power-metal fashion, although the synth is relatively tasteful, building the atmosphere, as opposed to being plastic and unnatural. The band seem to be on a clear run, too, with each album as respectable as the last, albeit with subtle changes. Compared to the past two, this album is more polished, and the synth is a lot more prominent, which is a difference, albeit not a bad one. The songs also seem a bit more mellow, more comfortable to play at a lower tempo. To me, this is a band whose development is ideal - not overly fast, but a slow, enjoyable development, not once compromised by a spell of bad material.

As in the previous album, the band's vocals are excellent; Diego Valdez is very reminiscent of Ronnie James Dio, but the musical context of the voice is easily different enough to make it feel honest and natural, suited to the bands sound, as opposed to overtly simply sounding like Dio. Over and above the distinct nature of the bands sound, it's quite clear that the band members are very competent musicians in their own right, with strong performances coming from all instruments, and a good mix of which of the said instruments has it's time in the spotlight at a particular time. Yes, the bagpipes provide a lot of the lead work, but that doesn't mean there aren't guitar solos, and good ones at that, suggesting that the band have successfully avoided being "Gimmicky" and are simply good in their own right - certainly, the presence of bagpipes doesn't please me due to any sense of patriotism, or because I want to feel particularly Scottish. No. They please me because I just happen to like bagpipes, and Skiltron incorporate them damn nicely.


I feel Skiltron are unsung heroes of power-metal - and they certainly don't get the attention they deserve. They produce a celtic-metal sound easily as good as any band from Europe, and whats more, they do it without making it too flowery. Their sound may be very much grounded in Scottish history, but it'd be good whatever it was about, and that can only be a good sign.