Nine albums into a long career, Root can definitely be said to possess a certain admirable longevity, and stamina for producing metal, over what is almost twenty-five years now. Their latest, "Heritage of Satan" seems to be a return to the bands satanic roots, no pun intended, and possesses an aesthetic in common with their earlier material, in terms of theme and artwork. 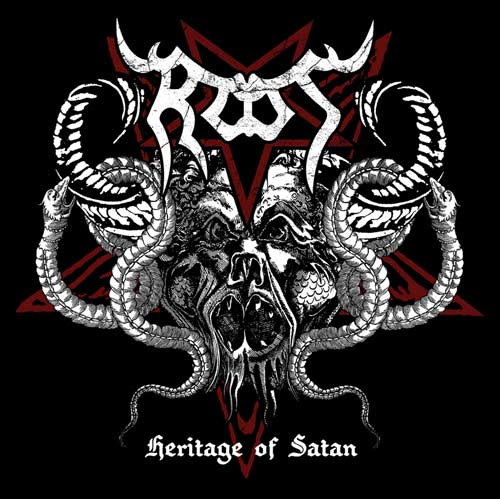 Root's brand of black-metal has always been quite quirky, and the level of actual black-metal in it varies a lot from album to album. This album is quite heavily dosed with black-metal, with songs like "Darksome Prophet" having all of the hallmarks of the genre, while other songs on the album go down a softer path, which is quite unique, but combines elements of just about everything. One of the things I noticed on a decent number of the songs was more of a sense of groove than on the albums previous to it. Not to the point of being in any way groove-metal, but certainly a noticeable amount - which gives a sound to the album which I can only describe as being like "Bolt Thrower having a go at playing black-metal". The album is varied in the style of the songs - although many are in Root's traditional style, there are certainly new things throughout the album; The black metal elements seem a little more conventional, which is juxtaposed oddly with the catchy, almost Rock like, melodic nature of some of the song arrangements, which is something the band have usually done to some extent, really spicing-up their unique style. There also seems to be an increase intensity throughout the album, compared to the generally mid-tempo works like "The Temple in The Underworld".

Vocally, Jirí "Big Boss" Walter is holding up very well, with his usual bellowing, almost classical sounding vocal attack unaffected by the fact that he's getting near to sixty years of age, and his vocal diversity is apparent as ever, with demonic sounding spoken word parts, harsh vocals, and accomplished clean vocals well blended throughout the album, and it's pleasing, at heart, to feel how unique the band have managed to remain, and I must admit I felt a thrill that this album is not only a return to their classic style, but is also easily as good as a lot of it. Initially, I wasn't sure what to make of the album, but after a few listens, it sank in. Damn... it's good, quite impressively good, in fact.

Root are among the most unsung of metal's unsung heroes, which seems very unfair - a band with a career as long as theirs, with as many albums, and such a unique sound, really, deeply deserve a lot more recognition, and this, dare I say, first-class release is yet another reason.