Argus are a good example of a band I listened to on testimony, expecting something quite different from what I got. They are, fortunately, also a band that, while unexpected, were still extremely good - a happy ending indeed. "Epic" heavy metal has a great multitude of cloaks with which it can enshroud itself, much in the way terms like "heavy" or "intense" can do very much the same thing. Argus represent an interesting take on the genre, one which has been going from strength to strength throughout their discography. Their third and, as I write this, most recent record "Beyond the Martyrs" is a heavy-metal experience up there with the best of them. 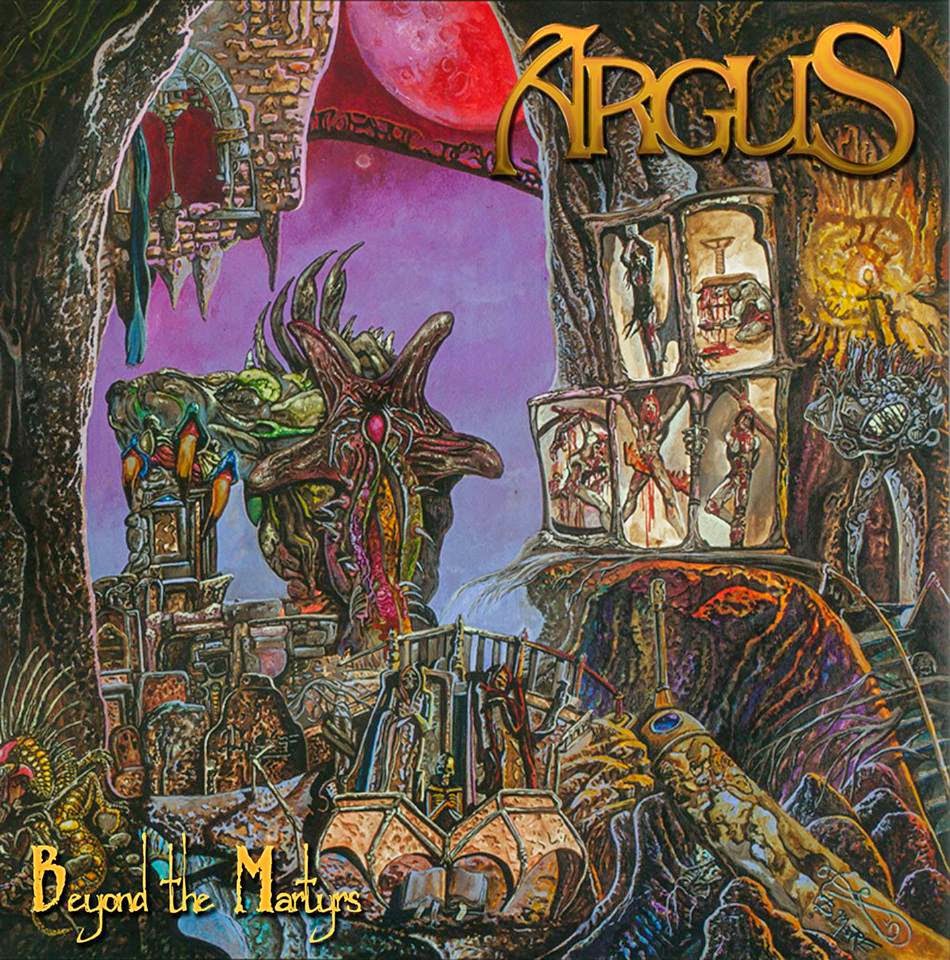 Beyond the Martyrs is a well executed example of a band having an epic sound without it being nauseatingly flamboyant. There are none of the overindulgence and pomposity of a genre like prog, or European-power-metal here; simply reverence to the old-school concept of epic and, for my money, proper way to do it - albeit without being a simple re-rendering of old cliches. Beyond the Martyrs ticks a great many of the abstract boxes of epic-metal; great melodies, memorable soaring vocal-lines, glimmering solos, and massive-chords. Stylistically, Argus sit somewhere on the line between a traditional and doom-laden metal sound - a style which is quite often apt to befit the term epic, and very much a style which Argus are clearly comfortable to use to its full potential, with a tempo to match. The record weaves very smoothly between slow sections which carry a hefty load of stored-energy, with chords being allowed to ring-out and bring all of their force to bear, and a plethora of victorious, striding sections which breathe triumph. At their slowest, Argus becomes a lumbering powerhouse, ready to spring into action - albeit not one which gives the impression of stalling-for-time... quite the opposite, in fact; the slow sections can often be the pay-off of the faster ones. That isn't to say that the band are one of two-extremes; the album in fact seems to avoid going especially close to high-tempos, and as opposed to an omission, this is unapologetic; the music doesn't need to go fast to do what it does best, and the striding, mid-tempo feast of riffs and melodies is easily enough to demonstrate that. Not only does the record contain songs which you remember after a single-listen, it contains songs which you know that you're going to remember while you listen to them for the first time.

Interestingly - especially for something aiming at an epic-sound, Beyond the Martyrs has quite a tidy, warm production; there's a lot of open space in the mix, as opposed to silences plugged by the decaying remnants of guitar reverb or general... noise, of some sort, as one might expect. This use of empty space in the riffs set Argus apart from a lot of their peers, and certainly gives the record a very distinctive sound. If I could better name what is going on, I would - but for now I urge the reader to listen for themselves. It is in this respect that Argus differed from my expectations - I've very seldom heard an "epic" sound succeeding as well as theirs does with production - heck, with a riff-style quite like this; the album, and the bands previous work, for that matter, feels very aerated, as opposed to cloyingly thick. It is here that I mislead myself when first approaching the music; I half-expected epic-doom, but it has to be remembered that Argus lean far more towards traditional metal than I had expected. It is an epic-sound born entirely of musicianship, transcendent of production, which in many other bands ends up as a tool with which to augment atmosphere. In this regard, Argus are epic in the manner more of a band like Dawnbringer or Pharaoh than in the manner of say, Atlantean Kodex. The record is extremely well-written, memorable, and sincere - not once does the album give the impression of winking-an-eye, or playing games; it's an earthy, honest and - if I hadn't made it clear - "epic" installation of heavy-metal.


I have put myself at quite some risk of spending the entire review discussing the concept of "epic". I hope some praise of the record has filtered through - and hopefully is present in the review both implicitly and explicitly. If more is needed, then I can safely say that Beyond the Martyrs is, itself a superb immersion into the concept of "epic" - and certainly does a better job with music than I can possibly do with words. Metal like this is fantastically enjoyable, sincere, and - at risk of sounding like an elitist (which considering I am an elitist, doesn't pose that much of a worry) - is utterly true.