For a while now, I've been aware of the fact that when it comes to black-metal - or at least, the blackened side of metal, I have typically been much more inclined toward the fusion genres and the oddities; the black-thrash, the first-wave black metal, the special cases; Rotting Christ, Blut Aus Nord, and so forth. Sometimes, however, I want to listen to some scathing nineties-style dark, ominous black metal; the kind which sends chills down your spine when you first discover it, mystified ever-so-shallowly by the controversy, the church-burning, and much more wholesomely by the larger-than-life evil sound. This craving has recently been driving me to explore more of the landscape of "traditional" black metal, if such a thing exists, and this leads me to one of my newer interests; the work of German band Nargaroth, the debut album of whom, Herbstleyd, I have been lending my ear to recently. 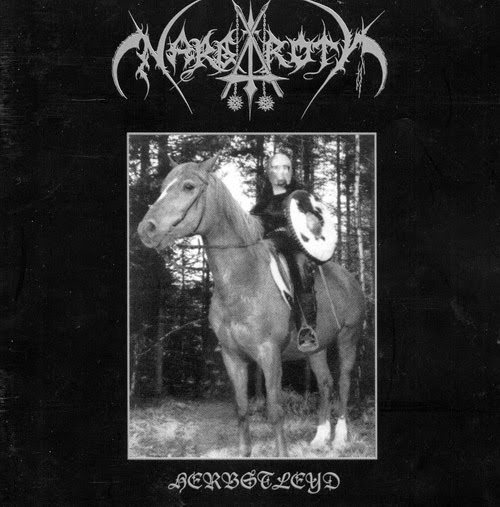 Admittedly, it has taken me longer than usual to decide what to think about Herbstleyd. The album is one of superb atmosphere but at times flawed execution, albeit as slowly dawned on me through several listens, flaws which are massively outweighed by the record's virtues. Following on in the hypnotic, grandiose style of the early Norwegian acts like Burzum, Nargaroth weave a rich, lush and enthralling sonic tapestry of triumphant tremolo riffing, repetitive but pleasant drum-beats, and simplistic synthesizers, all with the perfect degree of raw-production. Nargaroth are perhaps somewhat more inclined towards being dynamic, however, and the music on Herbstleyd strives at times towards a more agile style than the truly repetitive work of a record like Hvis Lyset Tar Oss. Getting into the flow of the album is at times tricky; the introduction has plentiful moments of splendor, but weighing in at around seven minutes long it is, frankly, almost offputingly excessive. Forgiving this, however, much of the rest of the record flows reasonably well from track to track, particularly the first half. Better indeed, than I had first thought, with a half-hearted first-listen nearly spoiling the album's chances to gain my appreciation. Fortunately, however, subsequent listens revealed the solidity of the record, and with misgivings having somewhat lessened, the excellent atmosphere spun by the tremolos and keys truly ooze from the speakers for appreciation far less blemished than it had, prima facie, appeared. It is, in fact, a very absorbing and pleasing album.

Here and there, of course, there are crude slips, some of which can't quite be ignored; a shortcoming of the drum machine here and there, particularly in the first track, where mistimed cymbal-hits come very close to ruining a section. Likewise scattered around the record are a fair few interludes which don't serve as much purpose as might have been hoped, giving the album, if anything, baggage as opposed to embellishment in some cases. Nonetheless, the main-course, the body and soul of the album, if you will, is intact. The black-metal sections (and indeed, more than a few of the better interludes) very much capture the beautiful, vast and dark feel which I love in black-metal. It offers both bleak, dreary and sorrowful sections - typically where key-use is restrained - with far more triumphant and melodious pieces with more predominant keyboards. These two sides of the record - or at least, the two sides of the black-metal on the record - are nonetheless well-reconciled, not disrupting its feeling of purpose. Often, contrasting atmospheres can create something of a meandering two-headed snake, and while at times the direction of Herbstleyd can seem slightly diffuse, for the most part the album very much knows what it is doing... certainly sufficiently to be thoroughly enjoyable to listen to - albeit in my case with a brief run-up to becoming accustomed to it.


As it happens, Nargaroth are a band that I've actually been aware of for quite some time; I'm not entirely certain what caused there to be such an elapse of time between being aware of them and actually listening to them, however. Indeed, this process took several years. Nonetheless, I once again encounter a band which makes me which I hadn't delayed exploring their music, and while the at times apparent indifference - at least, there appears to be such - towards the band by a lot of the black-metal community may have been an off-putting factor, it's certainly not something worth taking heed of; as far as the debut goes, I can safely say the music is great - imperfect, but nonetheless great.
This is an 8/10.