#358 Meads of Asphodel - The Murder of Jesus the Jew

Every now and again, I stumble across a band that I very quickly get really, really into. Currently, the band occupying that "slot" in my listening has been The Meads of Asphodel, an English avant-garde black metal act, and, as far as I'm concerned, one of the most interesting and unique bands out there. Sometimes, when I write reviews, I refrain from immediately telling you what I think from the outset, instead leaving my verdict as more of a surprise, only revealed by the reader having to strenuously complete the task of scrolling past the large image of the album art directly below the introductory paragraph... This time however, spoiler-warning, I think the record in question - The Murder of Jesus the Jew - is exceptionally good. The rest of the review is going to involve me telling you why I think so, quite possibly at great length. 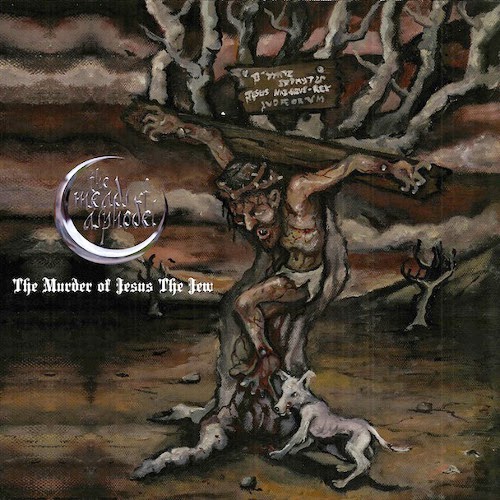 Sometimes less is more. Sometimes, alternatively, more is also more. And where more is more, The Meads of Asphodel bring what might well be the most. Particularly on this record, which manages to be the most dynamic and varied - and yet cohesive and flowing - album of its kind that I've ever heard. The whole thing - best listened to in its entirety, might I add - is eclectic, absorbing, grandiose and at times sublimely beautiful and grim in equal measure. Tracks like "My Psychotic Sand Deity" epitomise the record for me, running the spectrum from crushing, twisted black metal right through to sublime lead-guitar and comfortably incorporated beautiful choral singing, all whilst managing to avoid paying the usual price of coming across as spastic, and over-saturated with contrast. Nothing about the album is superfluous despite the huge - legitimately huge - swathe of influences which are brought into the fold.  The fact is, The Meads of Asphodel are actually a very difficult band to explain, such is the extent to which they go against the grain of what a black-metal listener might expect, pushing the envelope and furthering the things which the genre is capable of. Perhaps the sheer difficulty they pose to the reviewer - who is, after all, trying to put into words something which is not words but is instead sound - is the highest compliment I can pay to their work.

As I said, the record is exceptionally good, and while I - as many are - am guilty of sometimes using words like "exceptionally" merely as something to keep the word "good" company within the sentence, this time around, I very, very much mean it. The album itself, a concept album, is one which showcases just how well music can be utilised to tell a story - and unlike many a "concept album" this one actually sounds conceptual, with the life and death of Jesus evoked very effectively by the musical choices; the grandiose portrays the divine, as used early on in "...Psychotic Sand Deity", which concerns the wrath of God. Likewise, the record sounds very biblical, both with its epic sections and its crude, gristle-chewing sections, with Metatron's brutal narration gnashing and snarling it's condemnation on anything which stands in it's path. The competently dynamic nature of the record also ensures the other sounds which are present; punk influences, more modern sounding sections, and a multitude of others, are all woven in very seamlessly. While the record dances from style to style merrily, there is no point at which the listener is juddered out of their enjoyment of the music with a cry of "What the fuck happened there?", and really that says it all - if there was one band I firmly trust to capitalise on a "more is more" approach, this is it.


Ultimately, all that I have to say about this record has been said. Despite being from 2010, The Murder of Jesus the Jew has managed to be one of the albums which has greatly impacted my listening in 2014, and for good reason; it's one of the best albums I've listened to in a long time, and in the world of avant-garde metal, perhaps the best within that sphere that I have heard thus far.