I've been meaning to review the new Midnight record for quite a while now. Some years ago, I discovered Satanic Royalty, the band's début full-length; a record which has been consistently enjoyable to spin since I first heard it during one of those late-night Odyssey through YouTube in which were you end up isn't where you started, and you can't remember where you started anyway. I think I discovered Whipstriker that night too... regardless, I remembered Midnight first and foremost. More or less constantly since that discovery, I've kept a vaguely-vigilant eye on the arrival of a follow-up record. Earlier this year, I discovered, to my excitement, that a second-album, titled "No Mercy For Mayhem", had arrived. 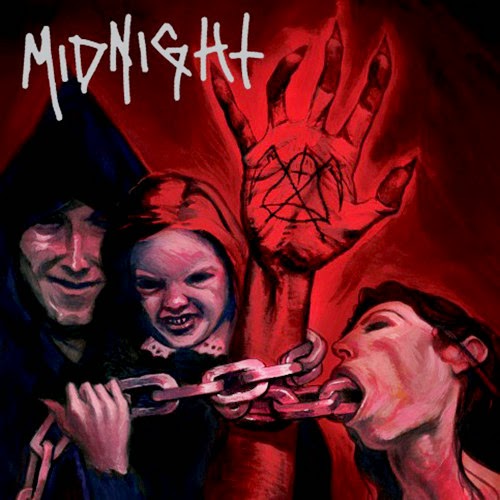 "More of the same" isn't a stand-alone phrase. It is always a phrase which needs some qualification. Before I brand "No Mercy For Mayhem" as such, it's best to clarify what I mean. There are a few ways that it can work, as a term of critique. Sometimes, the context is "Thank fuck it's more of the same". Sometimes, it's more of an "oh for fuck' sake". As far as this record is concerned, being more of the same is a great plus; immediately making it feel welcome, and snugly slotting it into the band's back-catalogue. No Mercy for Mayhem feels like a continuation, a extension, and a worthy counterpart to Satanic Royalty. The similar art-style, song-style and general aesthetic-choices immediately make the listener feel at home, and re-assert that as a project, Midnight absolutely and unapologetically knows what it's doing, and where it's going, and I'm more than willing to wager that this is exactly the album most of us were hoping for. Indeed, the album fits expectations like a glove, immediately - short intro notwithstanding - unleashing a tidal wave (no bonus-track related pun intended) of gritty, nasty, but magnificent rocking goodness. Lots of bands have reaped the results of the "Motorhead but with more Satan" formula, but few - even the most renowned ones - can do it quite as well as Midnight do, and as the record demonstrates with ease, still do.

There are a lot of bands which combine the raw leanings of black-metal with a more speedy, rock and roll vibe - heck, that's what black-metal was before the Norwegians came along and had their fun. Midnight, it has to be said, sit amongst the cream-of-the-crop when it comes to doing it. Stand out features like the ear for twisted melody which this album has - quite possibly more-so than the bands previous work give Midnight a memorable and outright cool sound, in a non-contrived sense of the term; the wailing but fulfilling melodies in the title-track, for instance, have a real sneering swagger. It's the sort of music which you almost instinctively know is badass - with some genres, especially the more inaccessible manifestations of metal, it takes a while to learn how to appreciate it. Midnight on the other hand? You know it's good right from the onset; it sets you're rock-sensibilities all-a-tingling. It's fast and loud, the way it should be, and No Mercy For Mayhem offers us another serving of metal done properly. In the best possible way, Midnight could very comfortably be the house band in the Titty Twister from "Dusk 'til Dawn". If you're familiar with said movie, I'd go as far as saying the twist half-way through makes the above statement, if anything, more apt.


It's the little things in life. Often, album of the year lists are populated by large, scholarly albums; those big sixty-minute progressive genre-defining, pipe smoking ones. However, I can safely say that when it comes to looking back on 2014, the thirty-six minutes of cacophony on No Mercy... are going to have every bit as much pride of place as any other record. Some albums prove their point with scale, intricacy and complexity - Midnight do a better job than most with rock n' roll, grit, and a sprinkling of Satan.