Electric Wizard are a real staple if you tread the path of doom, and I can safely say I've listened to all of their records to varying degrees of a lot. Paradoxically then, comes my admission that as much as I love their work, I've never quite known what to think; their classic records truly are classics, and yet there's never been the one in their discography - even Dopethrone, which is a monolithic statement of what stoner-doom is about. They don't have a bad album, either, despite being at times a seemingly inconsistent band. Generally speaking, they're quite enigmatic. In short, I wasn't sure what a new album was going to do for the wider landscape into which it would fall... indeed, it took me a long time to decide whether I even liked the new record, let alone think of anything substantial to say about it. 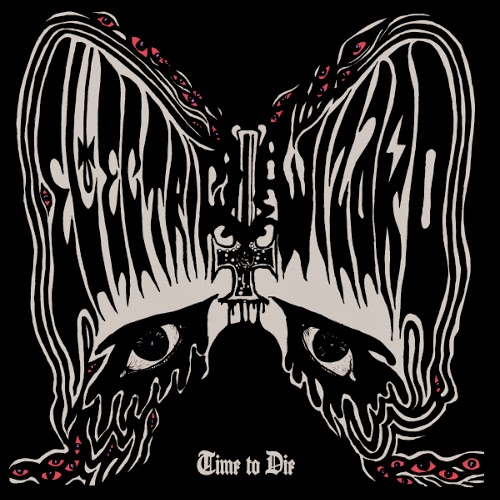 After skimming through the sample tracks online before Time to Die came out, I had mixed feelings. I wasn't at all sure whether I was going to enjoy it, and, indeed, in many ways prepared myself to not like the record. Of course, the worst thing which can happen to someone who has hastily prepared to not like something is for said thing to arrive, and be very good indeed, because that requires revaluation, and being wrong is no fun. As it happens, that's what Time to Die is - it's very good indeed - considerably more-so than I was initially expecting. In some ways - aesthetically, especially, it's more of the same, carrying on from the visual tone set by Witchcult Today and Black Masses, and sonically, this is also true to some extent; it's got the same direct riffs, it meanders less than, say, Come My Fanatics, and in general aims at catchiness more than outright delirious atmosphere. Of the three most recent records, however, I'm tempted at this stage to consider Time to Die as doing the best job, or at least, realising the band's vision most truly; it's hazier, heavier, and more drugged-up sounding than the previous two; records which are almost bare-bones by Electric Wizard standards. While I'm a fan of both, Time to Die delivers something a little more unhinged, nihilistic and negative; a return, perhaps to the triumvirate of Satan, Drugs and Negativity, as opposed to the upbeat leanings of late. For the first time in a couple of albums, Electric Wizard are playing doom metal which sounds doomed; everyone is high, but nobody is especially cheerful, and that's what I liked most about the band.

Time to Die is the most sprawling and out-there the band have been in a while, and in this regard the album is lifted a few degrees above a simple more-of-the-same verdict. It could be labelled a return to form, but it's perhaps more accurate to call it a return to an earlier style; it's got that buzzing, universe-imploding guitar tone, laced with reeling, weaving lead. The record feels less streamlined, and in Electric Wizard's case, this is a positive. Granted, the record is long, but there's surprisingly little wasted space. The first impression is one of a record which has simply got more going on, and subsequent listens reinforce it; it's thick and enveloping - granted the band never really made an album with truly non-trippy music, but Time to Die is definitely on the "oh shit, I should have taken half that much" end of the scale, which, for an Electric Wizard album, is very good news indeed. Like Dopethrone or Come my Fanatics, this album is mind-altering, and can be listened to as such with great relish. It's not the most out there record the band have ever done - but it has certainly had enough of whatever it's having to reach the brain-dissolving glory of the old days.


Nowadays, stoner doom has truly exploded into a cosmos of bands, and Electric Wizard are arguably no longer leading in their field, but with this record, they renew their license to spin some of the best doom out there. I'm pleasantly surprised, but in many ways I shouldn't have been; Electric Wizard albums are almost inevitably pretty good, and this one is no exception. It is, in fact, very good. When you get into one of these groups, there are only a couple of ways you can get out. One is death, the other is... being Mark Greening.