#330 Suffocation - Effigy of the Forgotten

I suppose I should have listened to Suffocation quite some time ago, considering that, as far as I'm told, the way most modern death-metal sounds is, depending on your perspective, either the Suffocation's legacy, or Suffocation's fault. Personally, until a few days ago, I had never made the step towards actually listening to the band themselves, but recently, I was suddenly hit by how gosh-darn badass their artwork is, and decided, on that basis, to see what all the fuss was about. 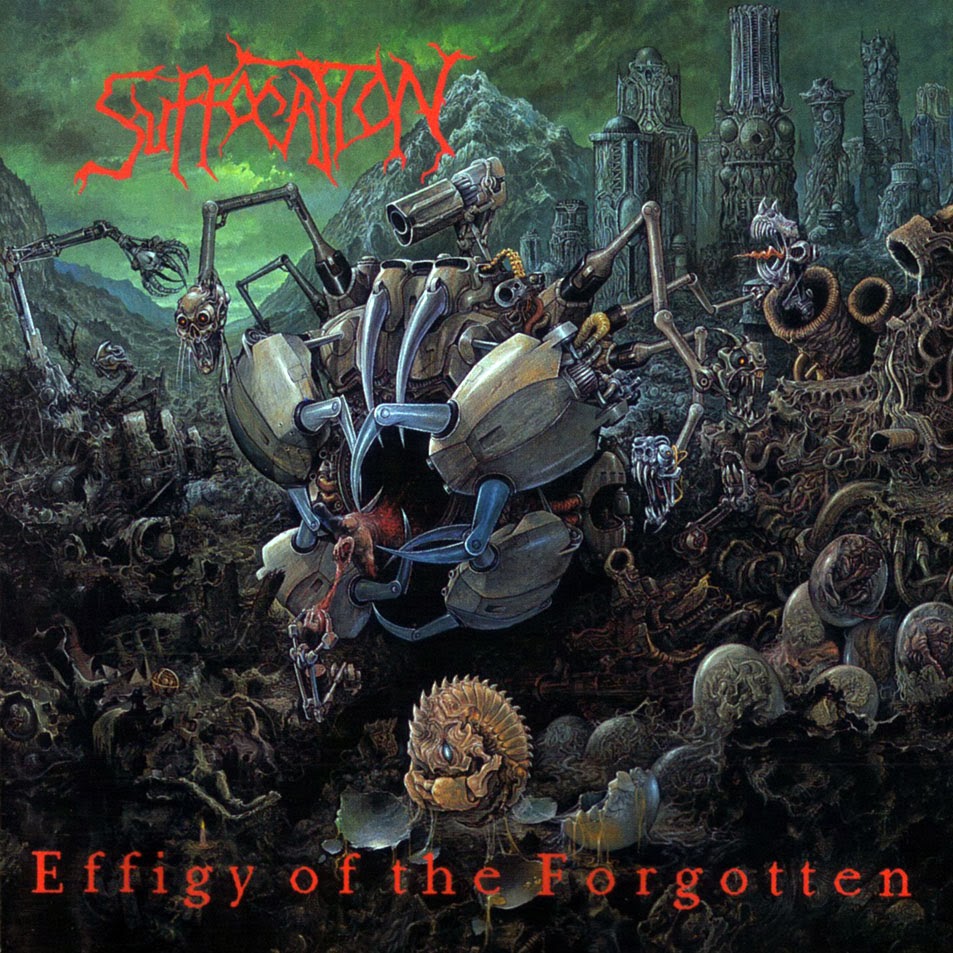 It has to be said, the recipe which Suffocation lay down in this record; Effigy of the Forgotten, is almost exactly the same recipe that countless bands still utilize to the letter to this day, over twenty years later. The main point to take away from that fact is that not only were Suffocation making this style of death metal first, they were also, for my money, making it better; The chef who created the recipe is, almost certainly, going to make a better dish than the people at the other end reading the recipe book, and good lord it shows. The record manages to incorporate all of the trimmings one might expect from the pioneers of the style; slams, extremely low gutturals, and a beady eye for technicality, all rolled into about forty minutes of impeccably produced churning. Simultaneously however, this record doesn't lose sight of itself; nothing about it is gratuitous, which is something most modern brutal death bands need to bear in mind - for all of its slamming, skull-crunching and stop-start song structures, the record still soars and trundles along smoothly; songs feel like songs, and riffs still feel like riffs. The album is self-propelling and sturdy - memorable, too, and finds a superb compromise between flow and technicality, reminding us that a band can be technical - adeptly technical, without stooping to sounding like a piano falling down an escalator.

Perhaps part of the secret to the records fantastic flavour is the sense the band exhibit in keeping a good number of slightly more old-school death-metal parts, something which tends to be either entirely done, or not done at all, by the two sides of the recent death-metal coin. Here, however, the balance is struck very well indeed, and while Suffocation is by no stretch the sort of punk-steeped, Entombed loving death metal which I usually consume, it certainly doesn't embody the silly side of death metal which I'm occasionally known to indulge in, either. That's where the greatness of the album is - in managing at the same time to have the fun elements of brutality, but without sacrificing the feeling of being quite proper. Indeed, the record really has its own feel, and the artwork evokes this; it's a mechanized, cold form of death metal, but not in the sense that it's soulless, merely different; it's not the warm, zombies-and-evisceration style death metal of the late eighties, but truly something fit for a new decade, bringing a new atmosphere with it, like a cold nuclear dawn, after a late-eighties party in a crypt - the production's cleanliness, giving the record the feeling of a precise, stainless-steel surgical tool very much emphasizes this impression. Sure, lyrically, the band deal with many of the familiar themes of gore, death and the like, but equally, the direction feels different, and interesting indeed. It's only on rare, lucky occasions that you get to hear a band with slams and d-beats, after all.

It's been quite a long road, my discovery of death-metal; more inaccessible to me than black-metal, and vastly more than thrash, I still don't consider myself to know the genre especially well, but, nonetheless, I consider myself to recognize a classic when I hear it. I can, indeed, finally say that I've heard the true originators of a style within the genre, and, for my money, they still do it better than any of the bands they've inspired over the years. Fantastic.