Conjuro Nuclear's first full length album is one which I was asked to review quite a while ago now. Sadly, I've been more busy than usual so far this year, and it is only now, a few months late, that I find myself with the opportunity to sit down and properly listen to the record. Having now done so, a couple of times, it feels about time to get a review of some sort written down for the cold, minimalistic black-metal which came out to meet me. 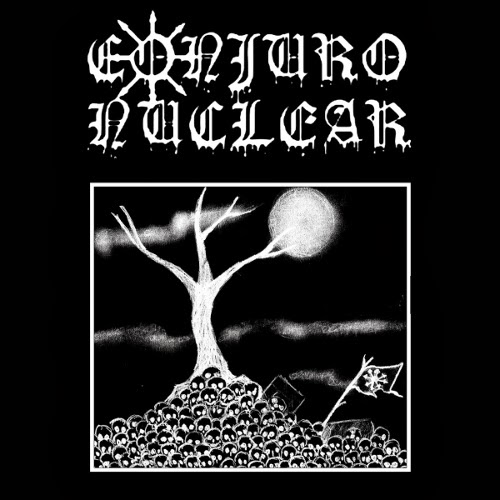 Luna llena y Radiación is an exceptionally minimalist black-metal record. Reminiscent of Burzum's early work, and the entire school of black metal which has long existed in that vein, it brings together riffs with the feel of driven snow (or perhaps more appropriately nuclear ash) with simplistic, crisp drumming and scathing, frigid vocals. The record as a whole is deeply steeped in ambient sound, at times subtly, and at others utterly, both sides of that particular coin being effectively deployed. The coming together of sawtooth, fluid guitar tone, with single notes driving the music forward, and deep, rich synth work with a primitive but effective feel creates an album which is extremely atmospheric - a property which defines it above all others. For it's simplicity, the atmosphere which is conjured is very engrossing and captivating - a whispering, cold feeling blankets the whole album with a mixture of sorrow and wonder, evoked beautifully by the subtle synth which is seldom truly silent, but avoids being clumsy and invasive. The sound of the record as a whole is surprisingly difficult to attach a date to - and it feels as easily part of 1993 than the truth, twenty years on, in it's identity as a 2013 album. A consequence of this ambience is to render the record quite mellow and gentle, and while it is an undoubtedly harsh record musically, it is far from savage, instead fully siding with atmosphere over the intensity which many would traditionally have opted for.

The percussion on the record is a motley assortment of programmed and genuine drum-work, both in a relatively minimalistic capacity. As albums go, this one is certainly not a very percussive one, with the drums seemingly mainly keeping the time, and punctuating the music a little, as opposed to really pounding away, although they certainly feel a little more present in the tracks with a real drummer, which seems to suggest that that would be a good course of action for the band to take-up on a permanent basis, if possible. Whether or not this slightness of drumming is intentional or not, I am uncertain, but it seems to both add and subtract from the record. The open, ambient feeling of the record is certainly emphasised by the polite, background style percussion, but simultaneously, I certainly find myself curious to see how the record would sound with deep, booming percussion. No doubt as the band progresses, we shall see developments in this sound, and the general rough-around-the-edges feel of the album as a whole certainly leaves allowances for the occasional production shortcoming, of which there are some, but pleasingly few of any note other than the percussion. Other than that, the record is, while perhaps quite unrefined, an extremely enjoyable one, and very competently written.

Once again, I have encountered an album which I was requested to review which has exceeded my expectations - such albums are always pleasing, and, given the quality of this debut, I shall be keeping a keen eye on Conjuro Nuclear's future works. This debut is, easily, one of the better albums of its sort that I've heard in a while.