Black thrash has, for a long time now, been solidified among my favorite sub-genres, for a variety of reasons; not only is is one of the genres which is most respectful to the vision of the earliest pioneers of extremity, but it also simultaneously manages to combine being fun without being silly, whilst at the same time being dark, visceral and ferocious - and at times deadly serious - without running the gauntlet of coming across as a bit up itself in the way that some black metal can seem in its endeavors to conjure the real, true, limited to cassette Satan. Another of the things I've always enjoyed about black-thrash is its ability to have a consistency and a seeming immunity to stagnation, which is about to be demonstrated by the record I'm about to review - the upcoming... EP (I think)... by English black-thrashers Cultfinder, who, as sure as a dog's a hairy beast, manage to tear the sound-waves apart with their music. 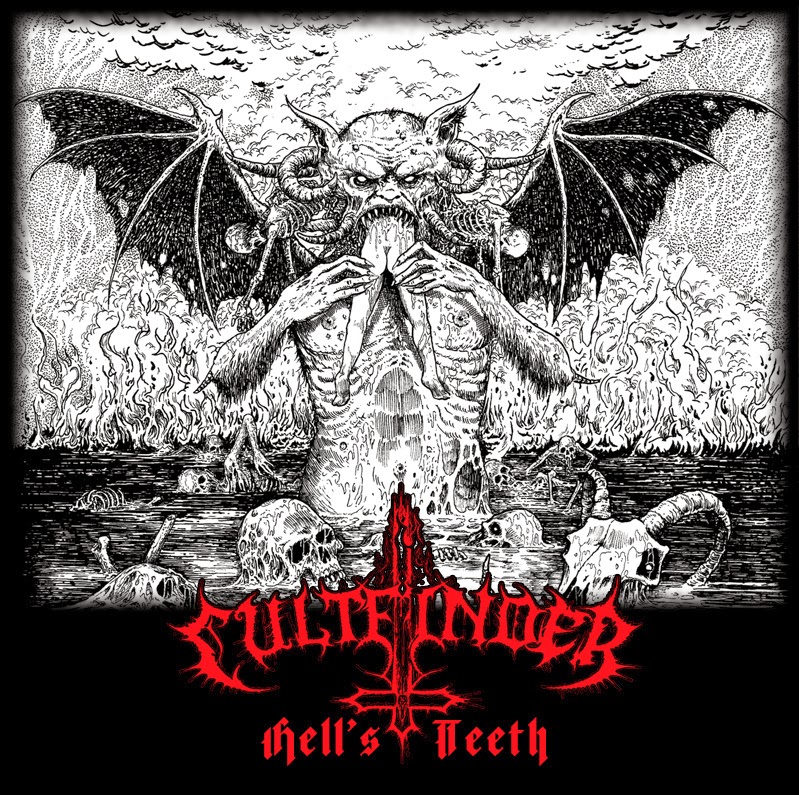 Cultfinder's brand of black-thrash is a vicious one indeed, Ferocious as a bear on crystal meth, and jagged as the contents of a bottle-bank which someone rolled down a hill, the first thing which hits you about the record is it's sheer abrasiveness; the production is truly gnarly - the guitars are rude, untamed and rough, and the drums are recorded in an enjoyably primitive manner, with very little in the way of post-production carry-on having been performed upon them. In short, they sound almost exactly as they sounded whilst in the process of being played. The entire record sounds very much the way that the artwork looks - gruesome, snaggletoothed and barbed - indeed, Cultfinder manage to sound truly hellish, which seems extremely appropriate to the record's name. That isn't to say, however, that the record isn't tight; the musicianship is legitimately top notch, and the songs carry themselves with a rabid energy which shines through on every song, capturing an intensity which a more-produced record might have lacked. The blend of elements deployed on the record are themselves reasonable eclectic, mixing the brain-splattering single-kick pedal assault which bands like Abigail, and indeed Hellhammer are renowned for, with a considerably blacker, blast-beat laden side which really drags the listener through the broken glass and barbed wire of hell, while combining it with a more tangible atmospheric element than either of the two bands mentioned above.

Indeed, the black metal sections manage to truly call upon the frozen, demonic elements of black-metal itself in their roaring, shrieking tremolos, and implement it seamlessly into what one might consider a difficult amount of d-beat laden, unapologetic punk elements to reconcile such atmosphere with. They also have d-beats, which, really, was all I ever needed to hear to be sold on the band immediately. On top of being, for want of a better word, mental, Hell's Teeth is also a deeply memorable record - the drum beats and snarled, spat vocals give the entire record a strongly percussive feel - the sort which rigorously drills the song structures into your brain, where they will remain for the rest of time - and all the better for it! As I mentioned in the introduction, one of the things which I often praise black-thrash for is its ability to retain a hefty element of fun, and this record is certainly one which you find yourself grinning whilst listening to it, and for all the right reasons, namely one of which being that it's the sort which can invoke the sort of "fucking hell" excitement which much of the best metal does. The record also has the appropriate magic to it - that is, when you listen to it, you get a taste of how outrageous the band would be in a live show, which is always a pleasure to hear from a record, and something which many bands lose sight of. A good recording, after all, should sound like a replication of the perfect live show, and not the other way round, as so many bands stray towards.


At the end of the day, I can safely say that Cultfinder is precisely the sort of vile filth which I will never, ever grow tired of hearing - and it's well executed at that. The UK as a whole doesn't have an especially rich crop of black-thrash, and newer bands like Cultfinder certainly cement in my mind a view that, hopefully, this shortage is about to change into an abundance.