For all that you might have heard about "Cold Lake", Celtic Frost's infamous voyage into glam, the fact remains that for better or worse, you probably have heard about it... suffice to say that Tom G Warrior would prefer that you hadn't. Often, however, having heard of it - or indeed heard it - is more than can be said of one of the band's almost universally neglected follow-up and sometimes-proclaimed return to form, "Vanity/Nemesis". A fair bit of that, perhaps, owes to the record's position; sandwiched awkwardly between what most people consider to be the very nadir of Celtic Frost's career on one flank, and by the band splitting up - for the first time - on the other. Relatively obscure and overlooked, then, "Vanity/Nemesis" is already dangerously close to being exactly the sort of thing I turn my attention towards when looking for things to review... 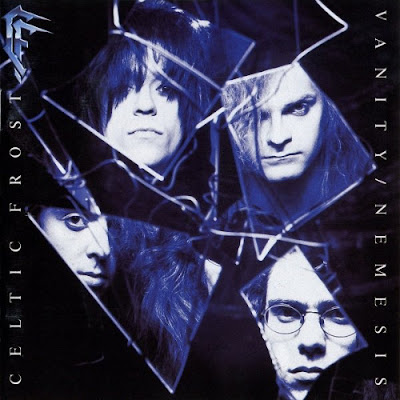 A week or two ago, I stumbled upon a hysterically pointless, broken-English review of Vanity/Nemesis which concerned itself mainly, if not almost exclusively, with how "homosexual" the record's artwork was. Aesthetic value-judgements differ, I guess... but the entirely unintentional point of that review remains; what can be said about Vanity/Nemesis? The thing is, it's quite an odd record. Not (just) in the artistic sense, that is, in the sense of it aiming at being avant-garde and grandiose in the way that Tom G Warrior has always striven towards, but also simply odd in terms of what it is. A return to form? The only answer that's really forthcoming is a non-committal well... sort of. The album has a return to intensity - starting fast, and picking up the tempo in numerous places throughout, giving a taste the speediness of the bands classic works, particularly during "A Kiss or a Whisper". It's also somewhat heavy, albeit lacking some of the filth and tonal richness of the bands earlier work; it certainly doesn't scream "first-wave black metal". The opening track, for instance, is an unexpectedly bouncy bay-area thrash style affair - creating an impression of the album as being quite a conventional one, which is, in some regards, true. It isn't until a bit later in the record that the signature weirdness inherent to a good Tom G Warrior riff begins to come back into the picture. That being said, the first vocal in the whole record is a reassuring "ugh", delivered like a relatively easy promise to be several degrees of magnitude better than "Cold Lake" - which, indeed, it is.

It's on tracks like "Wings of Solitude", with its quirky, bad-on-paper but awesome-in-practice backing vocals, that the character of the album really seems to show through. It's sturdy and, dare I say, unprecedentedly catchy in places. On the other hand, it's still a little infused by commercialism... nowhere near the extent that "Cold Lake" was, of course, but nonetheless notably accessible - a very similar approach, at least in my mind, to the early-nineties Megadeth records which would be coming around the bend in a few years time. In fact, one of my first instincts upon hearing the record was that it was "Celtic Frost meets Countdown to Extinction". Against my expectations, this dimension of the records sound somehow manages to work quite well. While Vanity/Nemesis isn't really "nasty" enough to be especially extreme, in the manner of the band's early work, it packs enough swaggering, misshapen punch to be a satisfying listen. While arguably one of the most conventional sounding Celtic Frost records, hearkening back to before "Cold Lake", as opposed to marching forward, it has easily enough of the bands usual idiosyncrasies and grandiose aspirations to be legitimately interesting to listen to nonetheless. A testament especially to Warrior's distinct playing style, being able to create and carry legitimately enjoyable music from a recipe which most bands could only derive something boring.

Imagine, for a moment, that Celtic Frost never reformed in 2001 (and in so doing, stuck around for long enough to create "Monotheist" - one of the best albums of their career, and, along with his later work with Triptykon, perhaps the closest Tom G Warrior has come thus far to realising his ambitious avant-garde vision). In such a world, Vanity/Nemesis would have been - and was for many years - considered the final statement by the band, creatively. And when it comes down to it, it wouldn't have been a bad last-word. A solid epitaph it would have been indeed - both as an apology for "Cold Lake", and as an album in its own right. I'm genuinely surprised by how much I enjoyed the record, and I recommend investigating it yourselves.