When it comes to early Czech black metal, the two names which tend to do the rounds most are those of Root, and of Master's Hammer - the two heavyweights of the scene. I've been a Root fan for some years - I discovered them by looking up their name in Metal Archives because I thought it was cool, which proved to be a very rewarding evening. As it turned out, the band was exquisite, both for their early and vicious material, and the sublimely beautiful later work. Frankly, you can take it as a given that Root has my seal of approval. Master's Hammer, on the other hand, are a band I didn't actually get around to listening to until much more recently, despite a couple of years spent feeling like I should be. There are, alas, so many bands and so little time - it wasn't until this year that I truly managed to listen to their work properly. As with Root, the journey of discovering their material has been pleasantly rewarding. 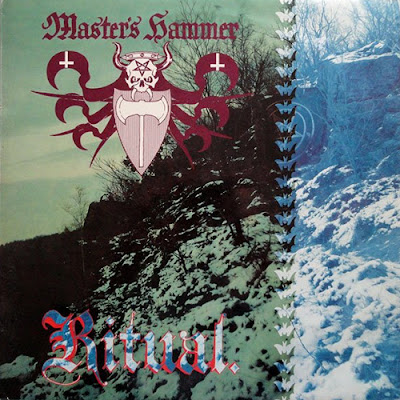 "Ritual" may well be the best know record Master's Hammer created. Its distinct and quirky artwork - which informed several of the bands subsequent works - can be spotted a mile away, and the sound on the record is similarly bespoke and unique, utterly befitting of the band's place among the heroic outliers of the early black-metal scene. Like Root, like Rotting Christ, and so many other bands who rose to prominence in those days, Master's Hammer proudly and successfully concoct their own recipe of black-metal. "Ritual" bursts forth with a majestic and intimidating core of resplendent riff-work and an intensity which should not be underestimated. A spirit of experimentation bubbling beneath the surface, making its presence known, unapologetically and at times with stirring beauty and power. The tone may be a relatively warm, and the production leaves some breathing room compared to the more conventional black-metal sound, but it is not consequently robbed of any writhing occult majesty. A warm tone does not necessarily preclude revelling, devilish music, and this record firmly demonstrates why - weaving with powerful and memorable guitar-work, and brought to crescendo with sublimely applied atmospherics. Ritual is not a chaotic album; it is, instead tight, well-ordered and cohesive; properties which may have been anathema to some bands at the time, but which, in the right hands - and believe me, these are the right hands - can weave a thing of the utmost musical splendour.

The soaring and elevating atmosphere of the record must have, at the time, been something between pleasingly novel and outright ground-breaking, what's more, the record has aged very well, maintaining a vitality and spirit which is not diminished in quality some almost twenty-five years later. The lofty melodies and wholesome atmosphere allows the music to rush along and truly be absorbing; a work of beauty, not merely of fun. A number of the riffs certainly have a measure of lip-licking devilry, in an almost pre-second-wave black metal style, when required - and there is great enjoyment to be had of that. Likewise, however, and perhaps of the most merit, when the band seek, as on "Černá svatozář" to create an atmospheric torrent of music, they likewise succeed. By my ears, it is to an extent easily excellent enough to give any black-metal band before or since a run for their money. Factors like these are enough to set apart "Ritual" as one of the most well-developed and inspired débuts in the whole sub-genre, showing off a clarity-of-vision and coherent musical direction far in excess of some of the charmingly chaotic and inconsistent works which early first and second wave black-metal is known for.

I like to think I'm well versed in black metal. I'm not... but everyone has to think they're good at something, I suppose. Regardless, a record as good as this coming out of left field and meeting me, twenty five years after its birth is always unusual - there are so many records that I do not know, of course, but a record as wonderfully written as this one feels like one which I should have been much more likely to learn of by musical osmosis at some point. Nonetheless, its discovery to me is a cause for plenty of celebration - Master's Hammer are certainly a band I have now discovered, and I plan to make up for lost time. What little power I have, I will happily put behind trying to extol the virtues of this album, and the band which created it.