Whatever your thoughts on Christianity as a lyrical theme, there's really no denying Trouble's place in the pantheon of seminal doom works. I'm slightly surprised that it has taken me quite so long to get around to listening to an album so tall in stature as this, and  one so thoroughly fitting with the sort of thing I enjoy. Throughout the years, I've often heard "Psalm 9" heralded as one of the most significant records in the doom genre, and over the last couple of months, I have finally set the time aside to hear it for myself. Better late than never, as they say... 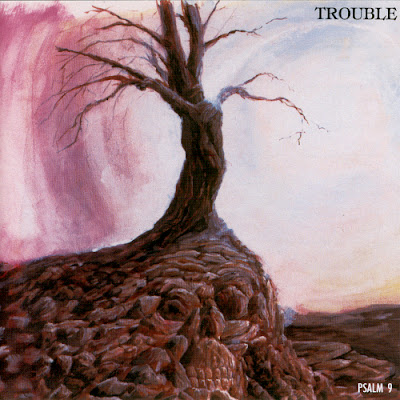 A great number of bands can trace stylistic lineage back through records like "Psalm 9" . Listening to the record is a thoroughly enjoyable exercise in why this is the case; if your familiar with the contours of doom as a genre, you can pick up hints of a few of them. Throughout the album, there is a coming together of variety and cohesion which makes the record a fantastic stand-alone collection of music, but also a potent foreshadowing device of a huge swathe of doom to come. In a classic case of the early endeavours of a genre being the most interesting, the albums influences span a huge range of the metal spectrum, incorporating a swift intensity which is missing from many of the lumbering, unhurried doom records of today. Indeed, a good proportion of the record has almost got more in-common with Metal Church than with Electric Wizard. Tracks like "Assassin" call upon delicious and archetypal early-80s heavy metal elements, smoothly blended into the more familiar low-tempo sections, which bring an atmosphere with the capacity to entrance, but for the most part stripped of the noticeable narcotic edge associated with records like "Master of Reality", or Pentagram's début. Given the rather sober nature of Trouble's lyrics and, I gather, ideology overall, this is in many respects hardly surprising. Rather than a harm, this very much serves to hone the record into a more powerful creation.

Throughout, the rough and scathing vocals imbue the record with a potent and brooding intensity, granting "Psalm 9" a harsher and less forgiving edge than the serene murmurings and gasping of many later bands. Whilst atmospheric in an earnest and wholesome way, at times easily verging on epic-doom of the style later adopted by acts like Solitude Aeturnus, Trouble reconcile this well with being gritty. The songs stomp along, using their serrated edges in tandem with the listener-absorbing qualities of the thick and, in the true sense of the word, heavy churning of the riffs below. The riffs themselves are comfortable to have some room to manoeuvre, not feeling the need to fill their entire domain with noise, and consequently setting free many of the hooks and memorable twists in the guitar-work to breathe freely and show their splendour, a factor which is similarly noticible in the vocals, which have a clarity and force merely baptised by reverb and echo, as opposed to outright drenched in it. "Psalm 9" is astonishingly successful in uniting its seemingly eclectic aims; striding swiftness collides with the mixture of epic, uplifting and spooky doom-metal, and mixes into it with the utmost of success.


I suppose in some ways the Christian themes at the forefront of Trouble's music must have dissuaded me at some point in the past. I've certainly been aware of their existence for longer than I've been listening to their work. Whatever my issue was, it's very much overcome now. I've heard some refer to Psalm 9 as preachy, finding the religious themes too overt... after a dozen or so listens, however, not once has their been a moment of the record which made me call its quality into question. I join the ranks of those, arguably wise, fans who aren't making a big deal out of whether or not the lyrics are something with which they identify personally. And in doing so, I can fully appreciate a true classic.