If proof were needed that Finland packs one hell of a punch when it comes to metal, 1993 is a good year to look at. Indeed, it was a hell of a year for black-metal regardless of nationality... but not least for two of the most crushing black-metal records to emerge from any of the newly-kindled scenes at the time; Archgoat's "Angelcunt" and Beherit's "Drawing Down the Moon", the latter of which is our focus, but both of which have had a lasting impact on the genre. Both are testament to the nebulous and unrestrained spirit of black-metal at the time; there was much less of a normative nexus of expectation into which bands were drawn. For that reason, records like "Drawing down the Moon" stand the test of time; offering piecemeal and necessarily innovative interpretations of the whispers of an evil genre, which was substantially less established than it would go on to become. In many ways, with any genre, the albums which are spawned before the development of an orthodoxy can often turn out to be the best. 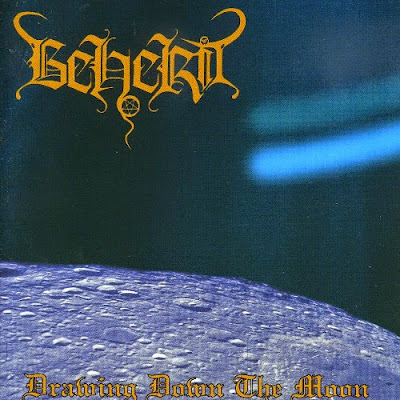 "Drawing Down the Moon" - and Beherit in general - are often lumped in with the bestial black metal category, and you can certainly grant that with an album like this, bedecked with fuzz-laden buzzsaw tone and at times a primitive approach to riffs and percussion, it's an easy assertion to make. It's not necessarily incorrect, either. Crucially however, wherever you tried to pin Beherit on a map, it would always be an outlier, and perhaps that's one of the great things about it; "Drawing down the Moon" is a unique piece of work. The heaviness might be among the first striking features of the records; well-defined and memorable riff-work creates a dark and occult sounding onslaught which rises with ease above being a mere wall of noise. It's this earth-rending but malign heaviness which captures a part of black metal which I love, and one often neglected by the more typical artists in, for instance, the Norwegian scene. Tremolos may be the default currency of black-metal these days, but records like this have gnashing, crushing elements in their riffs, akin to the shrieking, rusty jaws of hell themselves opening to devour - something which is less seen in the genre than one might hope, which, of course, renders it all the more welcome.

Beyond the heaviness, however, the record is also profoundly atmospheric. The second and third full-length Beherit records are entirely ambient, and you can very much feel it foreshadowed here in the keyboard use. Sparing but effective and prominent synthesiser use garnishes the record with all the more power to be evil-sounding - almost cosmically malevolent. The record draws you more and more into the desolate soundscapes conjured therein, to catch your death from the cold, airless vacuum. The keyboards are well executed, offering strong crescendos and passages in tracks with a primitive - but not comically primitive - approach; neither so minimalist as to be contrived, or so complex as to make the music sugar-coated. As I've mentioned countless times, this very much the Goldilocks-zone of synthesised use in black metal - and "Drawing Down the Moon" succeeds at being slap-bang in the middle of that. Indeed, it's more than just the synth which is just right. It's a very heavy record, but without sacrificing ease-of-listening. Despite my expectations while I was first discovering black-metal, records like this are not especially difficult to listen to, and even more-so now that my taste has become somewhat more rounded. Ultimately, the albums only real vice - and one which is easy enough to overlook - is the "whispered" vocal sound, suggestive of vocals which were recorded at a much lower volume, in places, than the rest of the instrumentation. Fortunately, this seems to only be an issue on a couple of tracks, and, as far as I know, has been far more prevalent on other records which I nonetheless succeeded in enjoying.


Here, I suppose, I should make some sort of whimsical statement to the tune of "why didn't I get into this band sooner". It's a habit I have, that's for certain. However, this time I'm content to be happy that I've discovered Beherit now. It doesn't matter so much about the order - and it's very reassuring that however hungry I am to discover more bands, and explore the music I love - it's never going to run out. On my journey, I've unearthed another classic, for myself at least - I'm sure most of you already knew it... but now I do, too.