#376 Goatlord - Reflections of The Solstice

Goatlord are one of those anomalies... and like all anomalies, should be treated with distinct interest. I don't immediately recall how I discovered Goatlord, but their work was recently brought back to my attention in a way which I'd usually be too cynical to indulge; through watching "best underrated whatever" type videos on YouTube. Usually, those sort of videos are top-ten lists composed by someone who only knows eleven bands - but this one seemed to actually have some good stuff in it; Goatlord, Kat, Torr - various bands I was pleasantly surprised to be reminded of. Regardless, with Goatlord recalled into my short term memory, I dredged the depths of the internet to find their 1991 record "Reflections of the Solstice". 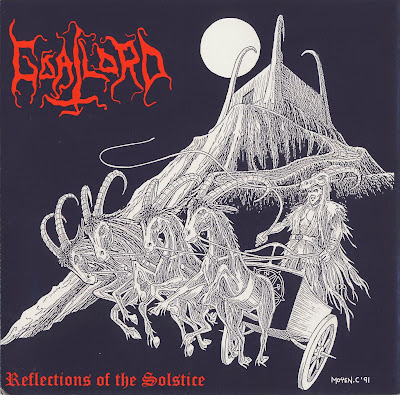 Rising straight from the nebulous realm of those early-nineties extreme metal records with red-logos and white artwork, Goatlord, like many of their aesthetically similar peers, tend to be press-ganged into the proto-black metal realm, and for the most part not wrongly so. Whilst having evil spewings on record from as early as 1987, the band's first and technically only record, "Reflections of The Solstice" came out just as the smell of change lurked like fresh blood in the air of extreme metal. It's only natural that proto-black metal springs to mind as the first association. The albums murky, blasphemous sound, combined with a grim and minimalist aesthetic certainly conjures reminiscence of the devilish revelries that were beginning to poke their heads above ground at the time. Goatlord's sound on "Reflections..." is quite a unique one, however - a little too warm with the guitars to have the eeriness of some first-wave and most second-wave black metal, but sufficiently eclectic in its influences to sound fairly unique; an interesting coming together of doom, miasmal death metal, and a more eighties orientated residue, replacing outright bombastic extremity with occasional flashy solos and hooks. Despite its warmth, "Reflections..." is simply too evil to fit the mould of a lot of the extreme which was being created around the time. Even within a genre which at the time was decidedly devilish, it is a black-sheep, and presumably one with a sacrificial purpose ahead of it.

The elements involved are united under both a primitive and filthy mantle of production - aside from a slightly odd drum-sound, in places - and relatively primitive musicianship and composition; powerful and lumbering, emphasising simplicity, but without robbing the record of flow to any tangible extent. It's very much the best case scenario in any record such as this; that unification of a primitive approach with sustained musical adequacy, and a lot of primitive extreme metal records lose something by only having one of the two - sometimes neither. Nothing stands in the way of this record, however. While neither scathing nor frigid not technical, the record is still one which drools with malice and evil in a way reflected by neither the archetypal black-metal that was on the rise, or the death metal which was beginning to level-out. The closest comparison I can bring to mind with any immediacy is the lurching maleficence of bands like Nunslaughter, particularly for the doomy, cackling and brooding sections delivered with great impact by both of the bands mentioned. Goatlord are amongst the most memorable of the USA's contributions to the most evil side of metal during the early nineties, with one of the more wholesome and well-rounded records of its type.


There are relatively few records out there which do quite what this one does - and even fewer which are contemporary to it. The record has a sound which manages to cohesively bring together an impressively diverse range of extreme-metal elements, while subscribing fully to none of them - it's a curiosity piece which transcends that role and provides a legitimately enjoyable and refreshing listen.