Keeping up with Venom after their classic era is generally seen as something of an optional extra; a side-quest and bonus-feature of metal-listening. Like so many bands, the attention paid their records has been almost inversely proportional to the band's time-line. It is, however, something I would submit as being well worth spending a little while exploring. Albums like 1997's "Cast in Stone" and 2000's "Resurrection" are records which I consider to be among my favourites by the band - fun and energetic, even if they're not deeply reminiscent of the classics. Heck, the even more recent run of records has been likewise quite respectable, culminating in 2011's "Fallen Angels". Not ground-breaking, by any means, but very much symptomatic of a band doing what they know. There has been no nu metal record, no experimental album, and for that, we need to be thankful. 2015's "From the Very Depths", which arrived in the post yesterday, shows signs, perhaps reassuring, of being every bit "more of the same". 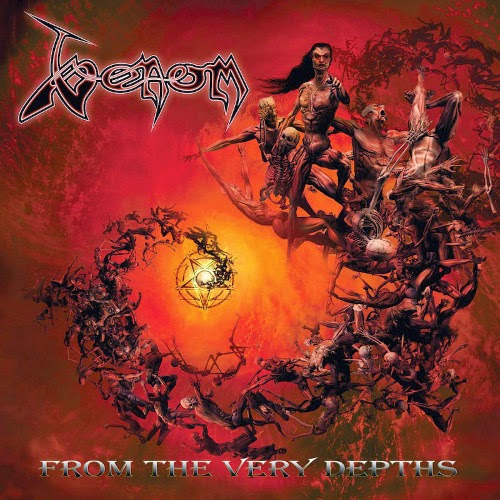 Predictably, the above "more of the same" is precisely what "From the Very Depths" is, with regards to how Venom have sounded for the last fifteen years or so. The previous five albums are a very clear sign that if Venom's sound is going to evolve at this point, it's going to do it slowly. Very slowly. Consequently, this record follows on from where the last one left-off, in more or less every conceivable way. The production is similar - raw, but crisp enough to avoid being akin to the muffled monstrosities of "Metal Black" and "Hell". It has, most welcome, a drum-sound which sounds like a drum-kit, and a thunderous and tasteful heaviness which captures the band's essence relatively well. As far as the "new" Venom sound goes, I tent to think of it as a separate entity. Whether or not the band are aiming at their classic sound, I am uncertain, but too many years seem to be between the band and those days to really make it happen. That isn't to say that From the Very Depths isn't enjoyable - but as with the other records clustered around it, it exists in a different world to "Welcome to Hell", and you can tell. Equally, however, it isn't trying to be anything Venom are not, either - and that gives it an earnest context. Even if you don't consider the sound to be especially inspired, it certainly isn't contrived; it's an album which, however you receive it musically, is clearly one which the band were comfortable to create.

On the other hand, "From the Very Depths" is fourteen tracks and fifty minutes long, give or take, and could probably afford to lose a track or two. Most of the tracks are relatively well-considered and self-contained, but become de-facto filler in contrast to the stand-out tracks, simply in virtue of not being as good. The record suffers from repetitive use of the same musical tropes - seemingly endless mid-tempo riffs being one, and jarringly "starty-stoppy" riffs another. It could certainly benefit from a few cans of Red Bull or a cheeky bit of something stronger with regards to  the tempo... although in thinking this, I do find myself needlessly trying to squash this record into the "old Venom" framework - is this album meant to be a fast one? Perhaps not, but I'd like it to be, even if it is worth noting that Venom are better at mid-tempo riffs than one might automatically assume. When it works, it really works, with crunching, swaggering riffs imbued with real power, some of them coming close to the legitimate mid-tempo crusher that was the "Resurrection" album. Here, however, such tempos are made use of to such an extent that fast songs are rendered rare and precious islands on the record, with the tracks in-between becoming very prone to blurring and smudging into a veritable ocean of mid-tempo of which only some manages to stand out on its own right. Sadly, the album drags.


My conclusion is simple - indeed predictable. If you're familiar with modern Venom, you'll be able to pre-empt precisely what this album sounds like. If you're not familiar, listen to this, and then you'll be able to pre-empt exactly what modern Venom sounds like - it's a two way process. The record's quality similarly easy to generalise. It's good fun, with a few tasty sections. Here and there you catch the inspiration which lead to the classic records out of the corner of your eye, amongst the less exciting material. "From the Very Depths" is completely interchangeable with any recent Venom record, in so far as it's not bad... but heck... that sounds like consistency to me.