I've seen Saint Vitus twice. The first time, I only knew one track. That track was, predictably enough, Born too Late. The second time, I only knew one record. That record was, predictably enough, Born Too Late. But attending only to that album is, as I have since discovered, merely scratching the surface with regards to the bands fantastically twisted doom legacy. The day I learned that lesson was the day I walked into a record-store with some spare cash, and, adamant to get some new vinyl, instead of leaving having purchased nothing, I blindly bought Die Healing. In the time since, it has become among my favourite records at all, let alone one of my favourite Saint Vitus records. 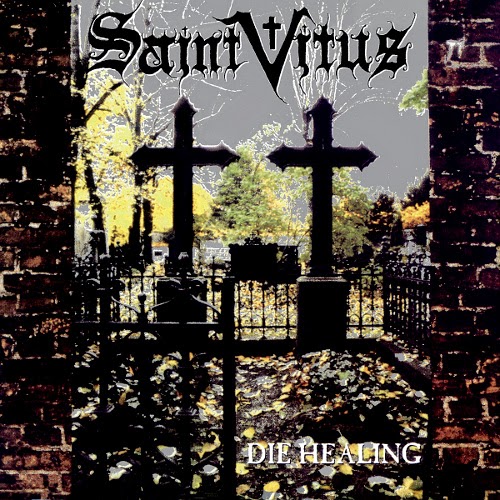 Die Healing holds a place as one of the best produced Saint Vitus records; luxuriantly echo-laden, vibrant and cavernous. The production does untold amounts of justice to Dave Chandler's signature sandy guitar-tone, course, but soaked in reverb and crunch, coupled with a huge drum-sound which should be the envy of thousands of other doom-records. The album is downright enveloping, descending like a haze - across the room you watch the speed of the clock-hands fluctuate, the air shimmers... so forth. These factors, together with the mournful and slightly deranged vocals of Scott Reagers - delivered in the manner that many would insist that doom vocals should be - results in a truly winning combination. It is, in fact, just as the artwork would suggest. The cover, in many ways reminiscent of Black Sabbath's début - a grim and evocative photograph; the natural and the built-environment intertwined, tells a heavy story. Die Healing has that self same eerie, truly doomed charm of a record like the above; both are truly otherworldly and perhaps a little scary. It's sinister, devilish and bizarre, and while an extreme-metal record might be the most stereotypical album that your parents might warn you about, an album like this, surrounded with mystique, atmosphere, and scruffy denim-clad people smoking funny-smelling cigarettes doesn't come far behind. I've always loved metal for that mystique, it's music for strange people - heck, it's strange music, and Die Healing is the best kind of strange.

Die Healing is an extremely consistent record from front to back; a deeply coherent work, but also a multi-dimensional one; twisted and unhinged in places, deeply sorrowful in others, and stopping at a number of stations in-betwixt. Each track stands on its own with ease, and each has its moment - its flavour on the record. "Dark World" opens the album in sleek, memorable and haunting fashion, a long and contemplative walk through the rotting leaves of the album's artwork. The journey continues throughout the record, closing with the gruff, gritted-teeth heroin-hymn of "Just Another Notch" with Dave Chandler handling the vocals to bring the record to a conclusion in rugged, punk-fuelled fashion. The album is a real journey, touching every tried-and-true Saint Vitus trademark, whilst breathing with a freshness and crispness which is more or less unmatched in the bands entire discography. It draws you in, dooms you, then kicks you out like a bizarre carnival ride, like those moments when you walk bleary-eyed out of a building astonished only to be that it's still light outside, and unsure what to do about it.


Perhaps Wino's contributions to Saint Vitus are usually the most fondly remembered, or at least, the best known - and I have a lot of love for the "classic" Saint Vitus lineup... Records like this, however, show beyond all reasonable doubt that vocalists like Scott Reagers have contributed to records which are every bit as quintessential, classic, and untouchable. Die Healing earned its place as my favourite Saint Vitus record, and seems set to remain that way. It's a sublimely dark closing statement for a band which would go on to be silent for over a decade afterwards.