I'm not trying to score metal-elitist points or anything... but I listened to a battered old LP of Num Skull's cult-classic "Ritually Abused" at a friends house one evening a long-while Relapse Records re-released it. Fortunately now, the album is widely available again, and widely promoted, and that is damn good news. "Ritually Abused" is one of the unsung heroes of the heavy, scathing rear-guard of thrash in the late 80's - it's an album which people should be investigating, an album which ought to be picked up by people who missed it the first time, and, frankly, that's almost everyone. I went ahead and bought the Relapse remaster... the tracks-names were all completely mismatched, but I suppose it's the thought that counts. 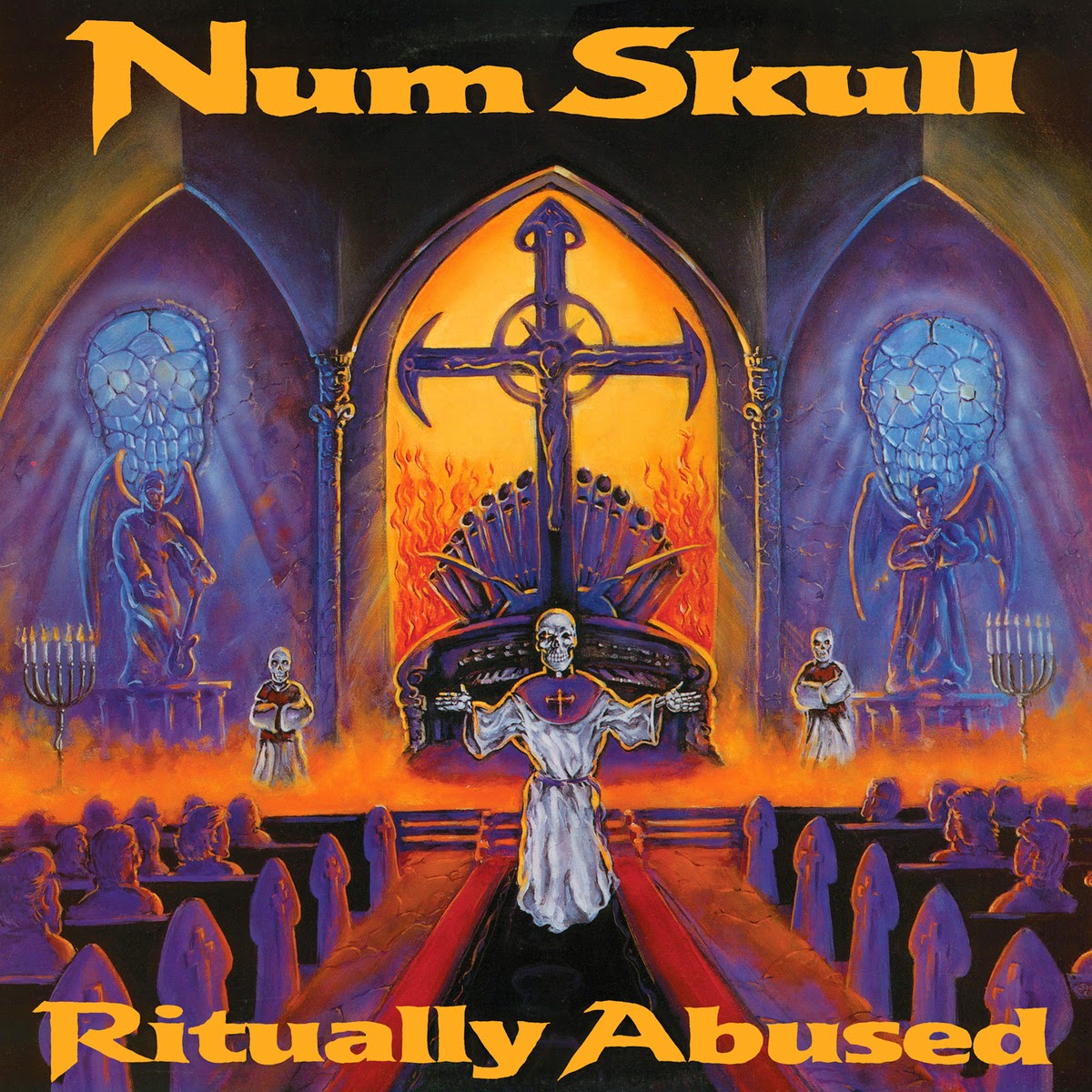 "Ritually Abused" is a classic which damn well looks like one. The artwork is a lush visual feast - it's the sort of record you would buy on a whim, and it would reward you for doing so. The colour scheme and layout are simply sumptuous. I've always cared a lot about good artwork, and albums like this are why; good artwork always adds to an already good record. Musically, the record is quite representative of the goings-on of its time - the entire album is probably best thought of as a thrash album, but as with many records from the time, while the music twists and turns, it screams "death metal is coming" at the top of its voice... much in the way that a record like Scream Bloody Gore was more a sign of things to come, than an instance of what such things were. Regardless, it's damn heavy - a cannonade of riffs with a filthy tone which bludgeons as much as it slices. It's not razor-sharp and it's not especially flashy - it's tough and gravelly with just enough lucidity to pronounce the excellent riffs. The dry tone puts plenty of emphasis on the heavy side of the album, and on it's power. At a glance, the most extreme music at the time divides vaguely between heaviness, intensity, and evil-atmosphere. Num Skull invest primarily in the first two - the album flails and flagellates, grinding your bones for its bread, but it doesn't quite drip with evil in the way something like Possessed's "Seven Churches" from three years previously does. When it comes down to it, the result is an album which represents a mature genre at its best, as opposed to something with a huge spirit of experimentation. The final stepping-stone on that genre's journey, it sits astride the barbed-wire fence where thrash ends and death-metal begins.

It probably isn't unfair to call Ritually Abused a "riff" album - and it's within this domain that the album shines most brightly. Every song has riffs of the sort of caliber which would make them stand-out riffs on lesser albums - but Ritually Abused is no "lesser" album. It took about thirty seconds to impress me, and then emphasized the point by staying that impressive for its entire duration. It's relentless in both pace and quality. The songs whirl and dive from one riff to the next with almost impulsive abandon, but simultaneously maintain a deeply coherent flow. It's jarring, but in the right way - constantly taking the listener by surprise, but not off-putting; it can take a while to get used to, as with bands of similar intensity - Sadus for instance, but once accustomed, the album constantly rewards your inner riff-lover - one of the most fundamental but at times easy to neglect indulgences of any metal fan. The songs are packed with variety - there are a few albums worth of riffs within about forty minutes, but there isn't a feeling of hurry. Indeed, the whole album reeks of well-measured craftsmanship and maturity, almost surprising for a debut. There are no throw-away songs... no throw away moments.


It's genuinely good to see "Ritually Abused" peering out of the chasm of obscurity - hopefully to be noticed once again by friends of the underground. It's also an important lesson to remember. Hidden gems like this are abundant - more so than most of us, including myself, imagine; for every one which comes once again to light, like this, there are many more hidden still below the surface. Ritually Abused is a statement of excellence by Num Skull - heck, by thrash in general. It is also a hefty reminder never to neglect the obscure. Not all that is obscure should be.