It's nice to see a band tangibly grow - to see an album which has really managed to make people turn their heads with interest. How familiar with the feeling you are tends to be tied to how long you've been into metal - it takes a few years to delve into the currents and flows, to see where things are going, and to know where the lines between vacuous and justified hype lie. I'm never entirely sure if I'm there, yet. The point being, on the subject of bands which have been trailing a considerable wake of hype and acclaim, I'm something of a latecomer to the work of Horrendous - discovering their début record "The Chills" in light of the acclaim surrounding it, as opposed to originating any sort of hype around it myself. So too, in many ways, for their second work; Ecdysis - in fact, while the record came out mid-October, I've only properly listened to it in the last few weeks. I have, however, been aware of it for longer than that, and now, the time has come to see if my listening experience matches the outright impressive amount of hubbub the record has created throughout the metal community. 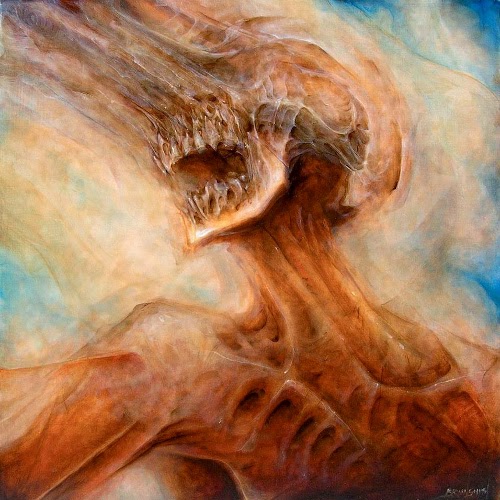 Every concious choice of an artist, or a group of creators, as a band is, has an effect on its audience. The first thing which is likely to strike anyone about Ecdysis isn't musical at all, in fact, it's the fact that the band's logo is left off the album's artwork. There are two paths I could take here; first off not reading very much into it - after all, perhaps the logo just didn't lend itself to being superimposed over the artwork the band settled upon - and that's eminently plausible. However, if I read more into it - wrong as I may be - we see an album which visually shrugs away the conventional "artwork and logo" format which typifies metal releases; something which reflects the fact that likewise, sonically, Ecdysis is no ordinary death metal record. Whether or not this is true, it sets the scene rather well for the album's music. "The Chills" was a superb old-school death metal work, and an inspired one, at that. Ecdysis is not quite "more of the same" however - instead, the album represents an expansion of the penchant for ingenuity and experiment on the part of the band - delving deeper and more sprawlingly into the seeds of unique atmosphere and fantastic composition planted by The Chills, which in this record have grown into twisted, unearthly trees.

The beginning of the record introduces the development extremely well; the uncanny, almost underwater feel of the music immediately plain. Horrendous' first record had this feel too - one of outright Lovecraftian difference, but is even more pronounced here. The atmosphere is bolstered by - created from, to a great extent, in fact - the wailing, distinct lead-guitar, harmonies and melodies which the band not only saturate the record with, but justify doing so by the dreamscape which results - while there might be a lot, it certainly isn't too much. It could seem tempting to assume that other elements of the music might suffer for this, but the resultant creation is not actually something rendered unwieldy or unbalanced by the lead-heavy playing - quite the opposite; when the record outright indulges in pure riff-based playing, the listener is urged to relish it even more - and solid riffs they are indeed, reflecting the refreshing song-writing which goes into the album. Ecdysis smoothly traverses everything from traditional, Swedish death-metal inspired passages right through to others which feel, my finite knowledge perhaps showing, like something genuinely exciting and new - certainly, I can't think of a band who have made a record which sounded quite like this one before, and the record is made all the more exciting for it. The record manages to capture being fresh without falling into the pitfalls which always cling close to blazing a trail. It's substantial but not over-long, atmospheric without being over the top, and innovative without having to flirt with gratuitous craziness.


Ecdysis takes a few spins to work its magic - or at least, it did for me. It's quite an incomprehensible record, initially, but with each spin it reveals fresh secrets. Even the first spin, however, will give the listener a taste which they will find themselves racing to delve into again, and of the marks of great records, being able to do that is certainly among them. What's more, there are plenty of other underlying signs that Ecdysis is a legitimate contender to be among the best albums this year, some of which I have tried to express above... and while I probably can't convey that seamlessly in words, I would suggest that the album itself might.