Within my music taste, I like to think everything has a place - at least as far as the metal-spectrum, still my primary residence, goes. For every grandiose and atmospheric record which passes through the speakers on my desk, there is likely to be a filthy slice of rock n' roll which is every bit as welcome to my ears. Every mind-altering, spirit-elevating record is balanced neatly by something a little more down to earth. Sometimes, like today, you just want to listen to a gnarly old-school serving of loud guitars and pounding rhythm - and there's definitely nothing wrong with that. Often, as will be the case in this review, d-beats are involved, and that... that makes things all the better. 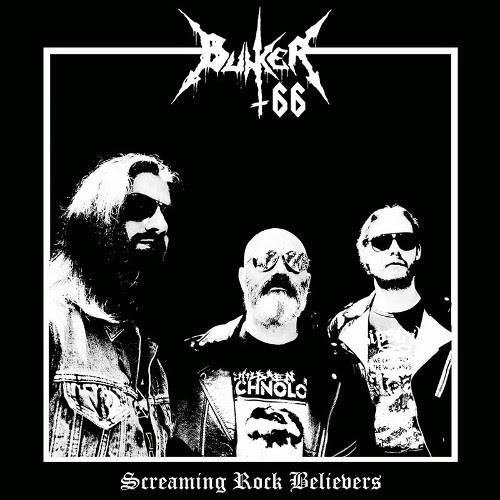 Bursting into life with "Seduce Me Tonight" - a cover from Celtic Frost's less than worshipped "Cold Lake" record, Screaming Rock Believers is a brave, brave album. Lots of bands might be tempted to cover Celtic Frost. Many have, in fact - but by covering such an unexpected track, Bunker 66 instantly prove that they don't exactly do what every other band does. They may worship the old-school, but the record feels distinct and character-filled, standing tall in its own kingdom rather than trying so hard to be something else. The sped-up, rampaging cover-rendition, as it happens, far outstrips the original, and sets the tone for the rock-gone-crazy sound of the record as a whole. Generally, the album isn't one which is overly worried about genre and style based lines in the sand: it is very clearly free from restraint creatively. Consequently, it offers everything from fantastically catchy clean choruses, right through to filthy blast-beat fuelled sections which carry more than a whiff of extremity. The album feels all the more of an achievement for doing this, too - it takes everything from almost glam-style sections right through to a hearty black metal influence, but rather than carelessly cramming them together, it actually comprises a record which takes these disparate elements and crafts a smooth and rewarding record to listen to.

A friend of mine described Bunker 66 as being "stadium metalpunk". In many ways, this album offers reasons to think so. The accustomed filthy approach to song-writing by the band is of course very much intact - don't worry about that; the songs on here are definitely as good as their last full length - Inferno Interceptors. Many of them rush along at high tempo, d-beats at the ready, and all the while accompanied by Thorne's distinct and enjoyable vocal style, offering the "classic" Bunker 66 sound. This time, however, the tracks often come across as a little more creative; the formula is spliced and spiced-up by an even more tangible rock influence, easily earning Screaming Rock Believers its name. The slow, catchy sections very much earn their place, often serving as the most fun-filled, memorable sections of songs, and bringing a swaggering rock n' roll sleaze, and a couple of very enjoyable sing-along choruses, to the proceedings. Songs like the title-track are a great example of "good old rock n' roll" being adopted fruitfully by the underground of today, with results which I absolutely approve of - bands like Bunker 66 and Midnight have proven that. It's a direction which was slightly unexpected in this case, but extremely enjoyable to listen to.


Bunker 66 have proven that they have what it takes to make a solid second-record. Often, when a band only has one full length, it is to the detriment of their presence in one's mind. The record might be fantastic, as Inferno Interceptors was, but nonetheless, it is only one album. With Screaming Rock Believers, the band have renewed and reaffirmed their absolute legitimacy, and certainly managed to re-enter my regular listening, rather than being a very occasional indulgence. I'm sure I've finished many reviews along these lines by now, but it's truth doesn't depreciate for it; there's no school like the old school.