I spent a while pondering what to review today - there are so many metal bands out there; almost an infinity of them, it sometimes seems, but sometimes it still takes a long time to find something. As the year slowly cools down, I have a growing awareness that I need to start getting my finger-on-the-pulse of how 2014 has shaped-up as a year in metal as a whole - in short, doing some revision, so perhaps I should focus on albums which were released this year. While I do that, however, it needs to be reconciled with the other side of what this site has always been about; reviewing albums whenever they're from. I'm as happy to review something from 2002 as 2014, with little regard for circumstance other than feeling like reviewing it. After deliberation, I settled on doing the latter, by looking at "Divine Blasphemies" by Teutonic black-thrash band Desaster. Why?.. because I can. 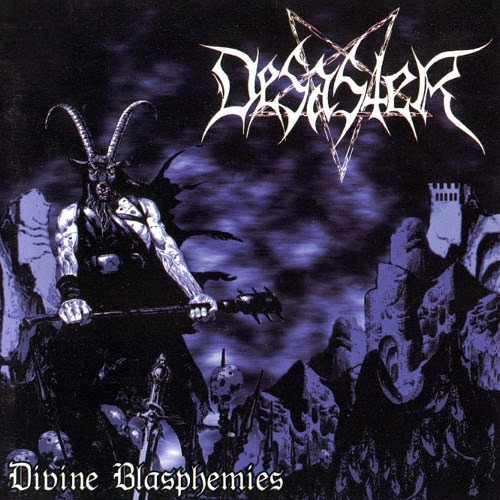 Desaster are one of the most consistent - and consistently underrated - entities within black-thrash. Uncompromisingly old-school and familiar, but likewise having claim to an instantly recognisable and distinct style. Nobody really does what Desaster do, in quite the way Desaster do it. Indeed, I could have picked more or less any of their albums as a backdrop against which to air these thoughts. Divine Blasphemies, however, is one which I feel expresses their style well; a striding and confident mid-era work, with some very well pronounced moments of what the band do best. The music is destructive, with the malice and sharpness of the best 1980's extremity, bred with the influences of second-wave black metal woven into the tapestry here and there. The music manages to be very intense regardless of tempo and structure, particularly with the production which the band choose, with truly pounding, clattering percussion emphasising the rushing, vicious aspect of the music whilst simultaneously giving the guitars room to do their ripping, desiccating work. The musicianship in these aspects, in fact, is really what gives Desaster a unique edge, as both the guitar-work, drumming, and indeed vocals, themselves loaded with rage and scything delivery, possess a lot of character, never failing to stand out from the crowd of the band's peers.

The atmosphere you get in a Desaster album - as is well represented here - is a very distinct one, capturing what might seem, on paper, quite a "standard" one; conquering might, and devilish violence... but doing so in a very different way to convention. It does what you expect black-thrash to do, but in a very different and fresh way, compared to the tried-and-tested table of laws to which many bands abide. Desaster's sound is one of great scale, but without being polished - the rawness and frostbitten sound of second-wave black metal is represented in a much more tangible way than it is with many of their peers. It has the regal, almost magnificent sound, and elevates the listener, whilst still sounding extremely faithful to the more overtly oldschool influences bubbling away below the surface - it's tough and visceral, but oddly beautiful and sonically indulgent at the same time. It's a strange blend, to tell the truth, and that is very much one of the things which gives Desaster as a whole the sonic magic that it has. The band are exciting to listen to not just because of their consistency or uniqueness, but because they do something extremely well which very few bands - even if others have tried - could do well.


It's a nice change, I find, to review something a bit more established - something which I've had quite a long time to let simmer. I can really come to some conclusions about what I think of an album like this, free from the mystification of shiny, new 2014 records. Something like this, beyond being a great album in its own right, is also a great palette cleanser. Desaster are a band you can count on to provide solid album after solid album - this one is no exception. It might be hard to explain exactly what it is that makes Desaster so enjoyable, but it's certainly something they've always managed to have.