It's been one heck of an autumn - one heck of a year, in fact, in terms of live-music. I've seen bands I never dreamed I'd see. I've seen bands I'd never heard of, bands I'd heard about endlessly, and everything in between. Bands I've listened to for years, and bands I'd never listened to before I saw them. The last thirty days, especially, have been a real treat - three shows which easily compete with each other for gig of the year; Manilla Road blew me away about a month ago, and while I didn't so much see Bolt Thrower as stand on tip-toes ineffectually and hear them instead, it was nonetheless a fantastic experience. Completing this glorious triumvirate of bands I half expected never-to-see was epic-doom outfit Solstice, and indeed their brethren in Atlantean Kodex. Solstice are literally the first doom band I ever discovered, as best I recall, and one which has inspired and kept me sane for many years. When "The Annihilation of Glasgow" was announced, I was immediately enthusiastic; 'Kodex alone are every bit worth the train-fare and the ticket, and the later addition of Solstice - not to mention rising UK traditional-metal act Dark Forest - easily sealed the deal. Since that point, I looked forward to the event as one looks forward to any show with "gig of the year" potential. 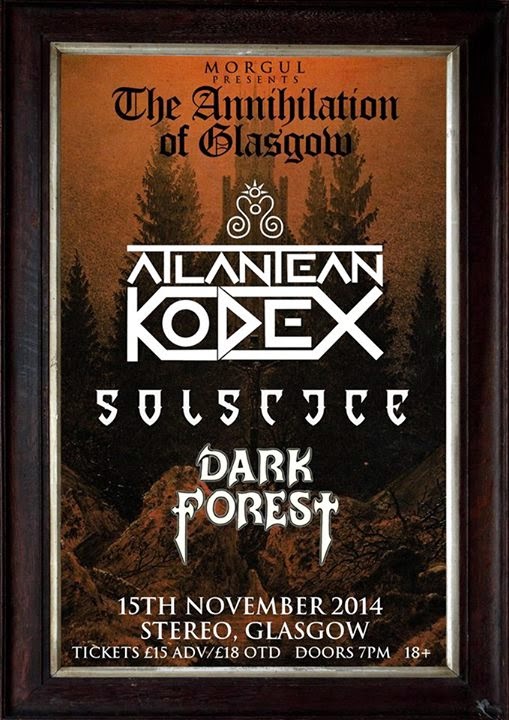 Shows like this are always something special. Glasgow is a fairly big city, granted, but not one you expect, necessarily, to see shows like this in. Atlantean Kodex, and the lineup in general - arguably one nearing thematic perfection - must have had one heck of a draw. Any show where I see a substantial number of people I've never seen before is promising. Ones to which people have flocked to from neighbouring countries is a step more impressive again. In a loose way, I suppose, 'Kodex, Solstice and Dark Forest amount to a contingent of something of a scene - at least as far as scenes exist in these post-internet days. Regardless, all three share an ear for earnest, stirring and epic heavy-and-or-doom metal. Just as importantly, however, the three bands share a collective fan-base. Most of the people present were interested in seeing all three bands play, and this created a fantastically enthusiastic, revelling atmosphere from the very beginning.

Dark Forest were first up, with a slightly shorter-than-expected set. What they lack in time, they more than make up for with quality, and by the second song, with the sound front-of-house shining-up a treat, they make their presence felt. The fastest band of the night in terms of tempo, they deliver memorable and extremely well-executed traditional metal with no compromises. It's radiant, glimmering goodness, delivered the old fashioned - in other words, correct - way. They look the way you'd expect a traditional metal band to look, and equally, sound that way, but without excessive toe-dipping into the ocean of the derivative. This band isn't made up of ne'er-do-wells who listen to nothing but Iron Maiden and sound only like them too. Not Dark Forest. This is a band made up of people who are clearly legitimately passionate about traditional metal as a whole, and Maiden' inspired as some of their sections clearly are, there's a far more diverse range of influences going into the cauldron to make this brew - a brew, as it happens, which makes for one hell of a live show. A superb warm-up comprised of earnest, extremely well-written and pleasing-to-the ear metal. Delicious. I hope I get to see them play a longer set eventually.

I buy some merch in the time before Solstice. A shirt from both them and Atlantean Kodex. Then I move to the front to make sure I'm well placed to catch the band - a band I will re-state, I have been hoping to see for years. Amid splendid guitar tone, they burst into their set with The Sleeping Tyrant, to audible roaring-of-glee on the crowds part - extremely well deserved praise on the part of the band. Solstice aren't perhaps the tightest band of the night - arguably, in fact, the least tight of the three, but not in such a way as to detract from their presence and sound one bit... and besides, they make up for it by being superb. A few classics from New Dark Age, both non-instrumental tracks from I am the Hunter, and "White Horse Hill" - a new one which the vocalist mentions, in rather self-aware fashion, will probably be out "in the next fifteen years or so". It's a damn good track too, and I eagerly - but patiently - await its arrival in studio-form. It's good. It's New Dark Age levels of good, in fact.

Interestingly, the band don't dip into "Lamentations" at all, and while I'd have loved to hear a few tracks from it, just about every Solstice track could well be my favourite, so I'm not going to be one to complain. Finally seeing the band live is another great moment in a year bursting at the seams with great live-music moments, and while their music is very introspective for me, it translates relatively well to the hubbub of a busy venue. As so often is the case with bands I've yearned to see for years, it's harder than I expected to get into "the zone" when it comes to listening to them in a live setting, particularly a band like Solstice, which has always been music I listen to alone; I find myself having a constant awareness of being in a crowded room, which transmogrifies the experience somewhat. I didn't quite transcend reality and glide skywards as I occasionally do whilst listening to the band's studio work, but I was nonetheless impressed - Every bit worthwhile.

Finally, Atlantean Kodex are an exceptionally good live band - even better than I was expecting, in fact. The sound is solid from where I'm standing, and the musicianship extremely tight - the band must put in a heck-of-a-lot of practice... and if they don't, well, they're damn lucky. The atmosphere amongst the crowd is superb. It's been a while since I saw crowd,-members who were able to sing entire songs word for word, and that should say it all. The band themselves really know how to deliver a good show. The energy is there, and the songs have everything of their glory in the live-setting; all of the grandiose splendour and fantastic riffs. The vocals are extremely good, better than many vocalists ever get in terms of integrity and delivery in the live setting, and easily every bit as good as their rendition on the studio-albums. Tracks like "Sol Invictus" really showcase a cohesive band, and an audience brimming with surging enthusiasm, coming together to create something which is sort of magical.

The whole thing - all the bands - are extremely affirmative of my faith in metal. I had worried that I might find Solstice to be the pinnacle of my evening, and end up unenthusiastic about Atlantean Kodex, but I was mistaken; the band are truly absorbing and impressive, and beyond that, very much managed to hold my attention despite having to follow-up one of my favourite bands of all time. Any band who can play for an-hour-and-a-half whilst still being memorable, engaging and whilst meeting with riotous approval from the crowd are one deserving of respect. Atlantean Kodex live up to everything good I've heard about their shows - their future is, I hope, one filled with promise. Epic metal, I think it can safely be said, is very very safe in their hands.