I'm a massive fan of d-beats. Logically following from this, I'm a massive fan of Children of Technology's post-apocalyptic d-beat relishing attack. For as long as I've been aware of their first full-length release; It's Time to Face the Doomsday - a sneering, grimy, thermonuclear storm in  twenty-five minutes, I've been eagerly hoping for a follow-up. Perhaps it's indicative of how haphazardly I keep up with metal news that the way in which I found out that the band's second full length - Future Decay - had come into existence was simply because I was browsing bands I like on metal archives, just in case they'd made new albums - heck, sometimes I'm late to the party, but sometimes the method works works. As it turns out, Children of Technology had. 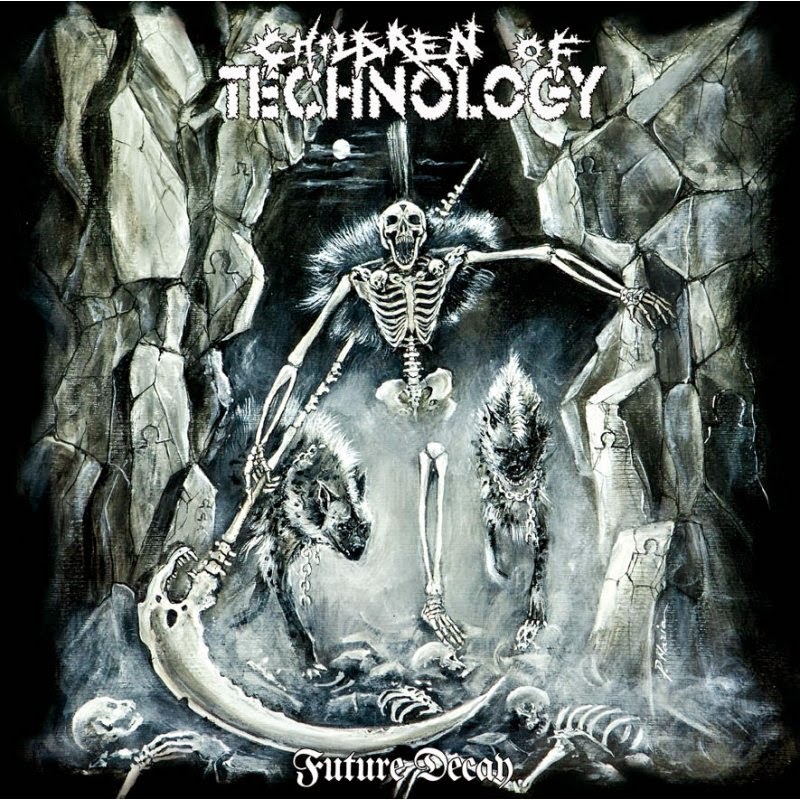 Future Decay opens with a somewhat more grandiose opening than I expected, with the first minute of music amounting to a distinct, enjoyable, and very musically solid intro-section, indicative perhaps of some misty moment of maturity, or stroke of inspiration the part of the band. Soon, a squeal and acceleration of the music forward, like some oil-drenched road-machine ensures the listener that no, the whole album definitely isn't going to be like that... or quite like that, anyway. It promptly ups in intensity, and very seldom relents right through to its conclusion, unleashing pent up d-beats like steam from a locomotive. There's something about the tone throughout the record which steeps it in something quite breezy, fresh, almost elevating; at first listen it seemed an unusual choice, but subsequently grew on me. As with the previous record, it's an attack, a lurching, vicious riff-fest, oozing greasy-haired, oil-on-your-hands metalpunk snottiness, but this album, as the intro foreshadowed, really does at times feel big. I can't quite tell the extent to which I'm imagining this shimmer in the music, but it does to some extent seem to be there; an impression of passion, scale; the roaring motorbike of d-beat madness colliding with the vast, scenic salt-flat, and the soaring chord progressions in the riffs certainly help to grant it this feel. It's odd for music like this to feel outright panoramic, and as first impressions go, that one makes Future Decay an extremely interesting album, especially considering how well it seems to work.

Atmosphere aside, which I've dwelt on for far too long as it is, the record offers you roughy what you would expect - I dare say what you would hope for - from a Children of Technology album. It's intense, cacophonous nuclear frenzy at its best, executed so as to be an indulgence;so many of the riffs and songs are extremely well formed, but stick close enough to the shores of familiarity to deliver music which, instead of taking you by surprise, is exactly what, knowing the genre, you want to hear - indeed, it's the sort of album you would happily refer someone to if they simply asked for "a good metalpunk record". For that reason, of course, it would be exaggerating to describe the record as particularly innovative or ground-breaking (although it does feel unusually fresh for a genre with its fair share of recurring musical tropes), but that need not count against it. People often underestimate how strong an album can be when it relies on simply being good at what it does, and this is such a record; a fitting continuation of the bands career, and clearly the product of individuals well-versed in their genre, and in particular, well versed in how to make it damn well.


Initially, I had my misgivings about Future Decay. Nothing major, of course, but a level of uncertainty about whether I was really enjoying what I was hearing. Subsequent listens - always vital to the process of digesting an album - have revealed that I do, indeed, enjoy the music to be found on the record. It's a bit different to its predecessor, but that if anything is refreshing, and to the sound of thunderous d-beats, I'm exceptionally refreshed.