Sometimes all you need to hear is a bands name, and you know you'll listen to them the moment you get the chance. It's safe to say that Nunslaughter are one such band. Last review, I went into some detail about what I like about death metal, and in many ways, this review is almost a sequel to that. You see, Nunslaughter are another band, albeit very different to Immolation, that really deliver the goods when it comes to death metal, although, as we shall see, the reasons are quite distinct. Today, I'm reviewing the album which introduced me to Nunslaughter's music - Hell's Unholy Fire. 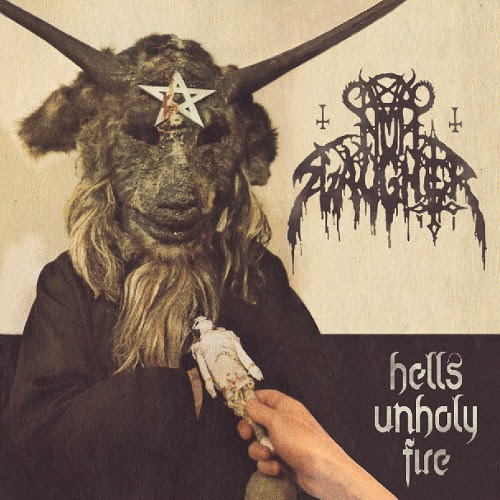 Nunslaughter describe their music as "devil metal", and there really couldn't be a more fitting term. Memorable, demonic sounding riffs meet one another explosively through the slew of short, to-the-point tracks on "Hell's Unholy Fire", with crushing but swaggering guitar which truly does sound like the devil's work, aided by filthy d-beats and frenzied, psychotic blasting. It would be tempting to praise Nunslaughter for a "less is more" approach, but that would imply that this album is somehow less than others, and that it certainly isn't - Nunslaughter pack dozens of exceptionally memorable moments into their material, while still keeping the average song-length well below two minutes - there's easily as much content here as on any death-metal record, even if this one is about as straight-forward as they come, and straightforward in a non-critical sense; Nunslaughter have truly mastered the trade of creating some of the best straight-forward death metal around. While a record which spits almost twenty tracks at you in a mere thirty minutes can be a challenge to internalise, it's well-written to the point of providing you with at the very least a few instant favourites, from which to slowly conquer the rest of the record. Indeed, the whole thing doesn't have a bad song on it whatsoever - each one a barrage of decidedly bare-bones, no-nonsense hellish ordnance, with one of the most crushing but attitude-laden guitar tones I've heard in a long time; like the roar of rusting, smoke-belching petrol engines.

I've always had a thing, as I think I mentioned last time, for death metal which really does sound like evil, evil music, whether with eerie grandiose leanings, or, in the style of the earliest extreme metal, for instance Venom and Hellhammer, in which the low-fi, primitive structure creates an organic, intrinsic evil sound in the music. It is in the latter style which Nunslaughter delivers it's payload of Satan, and what a payload it is. The album - heck, all of the band's work - has that spark to it; it feels like music which people weren't supposed to listen to, let alone enjoy; the sort of thing you would find one day, and be slightly terrified by. In many ways, I think a lot of the best metal - particularly the best overtly underground metal -  is like that; it has a subtle "no, not for you" exuding from every sonic pore to all but the relative few who truly enjoy it, crave it, and seek it. Hell's Unholy Fire feels near the top of the ladder when it comes to riff-based death metal, and at a guess, of the totality of riffs which have really caught my attention in the last month or so, it might be safe to say at quite a proportion of them are from this album. There are few records which come even close to offering up such a face-ravaging bouquet of old-school goodness.


Nunslaughter are, as far as I'm concerned, one of the best bands which the underground has to offer, and their raucous, catchy death-metal is of a sort which deeply satisfies me to listen to. Raucous, spitting, snarling and teeth-grinding, but most of all, delivering riffs and song-structures which make you want to listen to them again and again.