I like to start reviews with a few words how I discovered the band in question... But what is it to discover a band? I've known about Sanctuary for quite a while, even if I didn't quite know what they sounded like. I'd seen their logo on festival flyers, and heard tell of them plenty of times on the internet - indeed, for a couple of years, they've been one of those bands I simply know of.  On the other hand, I've not actually been listening to Sanctuary for very long - which is the moral of this story. As many bands as I know by name, the ones which could are the ones I've properly heard - note the gap between "heard" and "heard of". It can be easy to lose the will to explore the work of a band which you already know of, filling in the gap, but, as the Refuge Denied album taught me, that can be a mistake. 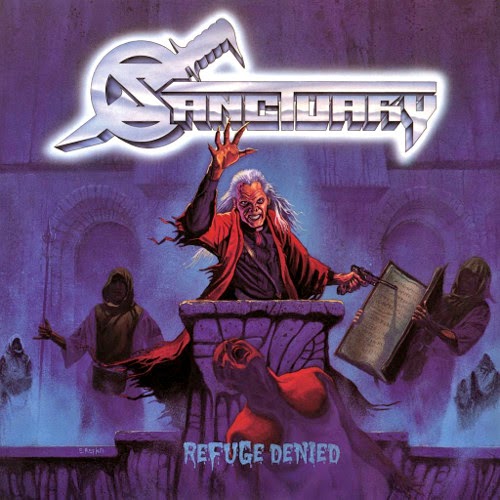 I'm a big fan of what I understand to be USPM, assuming that I'm not misusing the term. It has the sound which I associated with "heavy metal" when I was a child, and, even when listening to a fresh album I've never heard before, it feels nostalgic in addition to being greatly enjoyable. Refuge Denied, as it happens, is many of the things I enjoy about USPM. It's big, bold, brazen and shiny, but it is most certainly not over-the-top - it has a raucous but monolithic feel, clean as opposed to dirty, sharp as opposed to barbed. It's a record on which the basic requirements of metal are forged together with sufficient skill to create a grandiose, dynamic and complex album with a rich atmosphere and ability to absorb the listener with undulating, pulsating riffs. All the while, it does not need to call on extraneous elements to get the job done. It is, some might wager,  metal at its purest and in many instances most memorable form - heavy without being extreme for its time. Indeed, Refuge Denied was created at the apex of thrash metal in the US, and by my reckoning, draws on both the aesthetic and musical influences from the genre, without becoming entirely something of that genre - something Sanctuary share with Metal Church, another band which I deeply enjoy for similar reasons.

This blend gives the album a dynamic nature, with both plentiful swaggering, almost rocking sections in the vein of Judas Priest - which is, while I think about it, a very prominent influence indeed, by the sound of things - but also a capacity for energy, both in terms of swiftness and explosive sections, albeit in a contained, very tightly played manner. In many respects, the whole album is like that - paced and sensible, as opposed to frenzied. It doesn't feel like a record which has set out to prove anything by appealing to any extreme, but instead sits in the middle rather comfortably, which - almost ironically - gives it, and albums like it, a niche all of their own, and one which I'm especially partial to listening to. Refuge Denied has its character very much cemented into place by the production and tonal choices made - the guitar tone has a real roar and juiciness which works wonders for the songs, really giving them the touch magic - and reverb - which they deserve; the songs really ring out, and are given a glorious amount of oomph by the combination of solid guitar-work with full, rich riffs, and the passion and power of the vocals, which often serve to elevate the songs to the next level.


Above all, however, Refuge Denied is an album which manages to be very fun without being saccharine, and retaining a very agreeable balance between catchiness, sincerity - which the album certainly has - and enjoyment of the upbeat sections of the record. Ultimately, when I listen to an album like this, it takes me straight to the meaning of what good old fashioned heavy metal is all about.