As a consequence of thinking of a band to review whilst simultaneously thinking of an ice-cold pint of Guinness, here we are, with Tankard. Veteran beer soaked thrash-warriors with a discography to match their appetite for the fine beverage, "The Beauty and the Beer" is a comparatively new album, dating to 2004, but after a brief time in the freezer, I'm taking it out, pouring it into an... emm... tankard, and having a taste. 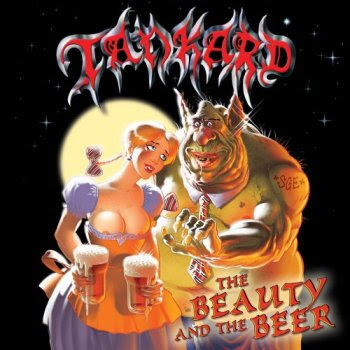 From the moment I realised that the first song was about, predictably, a bottle of beer, from the beers point of view, I knew that the band would be a fun listen. Fortunately, not every song that the band sing are about beer, and some of them take a more serious road, with the usual themes of thrash; global, political and society based songs are dispersed through the album, and what would otherwise be one of metal's longest running gimmicks is instead the occasional song or clever-pun here and there. Above and beyond the foaming pints that embellish the band's image, they do write very enjoyable thrash, and the songs are solid, especially for their relative newness, with so many ageing thrash-bands losing their touch, Tankard seem to be keeping theirs well in this album, and while their albums, as far as I can see without listening to many of them at-all, are of rather random quality, this seems to be a good 'un. Not the fastest, and maybe not taking thrash in any fascinating new directions, but nonetheless solid as a rock.

Perhaps the alcohol related humour of just about every single Tankard album threw me off for a while, but I'm glad I went past that; There's certainly more to the band than what you'd initially perceive - any band which make an album like this in the 2000's, an album which would sound at home in the 1980's, is a force to be reckoned with. Everything from the songwriting to the production is very much optimal, and I would be little-shocked if anyone were to describe this album as a modern thrash classic. The album is certainly technically sound, and very solid from a songwriting perspective. I can't find anything in particular to fault about it. There isn't any filler to speak of, and I can't fault the frequent alcohol references - I'm sure most thrash fans like a pint or twelve - after all, that's one of the cornerstones of thrash; if you're not singing about nuclear war, you're singing about booze... Or both, depending on whether or not you're in Municipal Waste.


If riffy, energetic thrash it your thing, and you haven't listened to any Tankard, I recommend that you do. I feel almost guilty for not listening to them sooner and more often, and I've certainly taken too long to get into a band who can certainly make a good album.