I must admit, I don't listen to as much Lamb of God as I used to, but a new album by a band so well known is enough to draw upon the curiosity of all but those most committed to excommunicating metal's mainstream side, and in all honesty, I am not one of those people. If you count Burn the Priest, "Desolation" is the band's seventh studio album, and as many prophesied, is pretty much consistent, as the band have been for a couple of albums now. 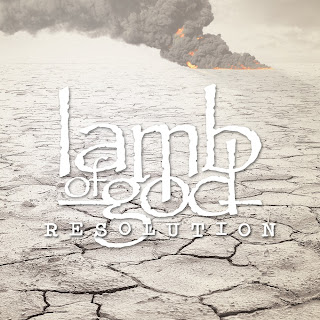 As I see it, Lamb of God released "New American Gospel", which sounded like groove-metal in a washing machine, went down an interesting road on "As the Palaces Burn", then wrote "Ashes to the Wake" and have been doing albums roughly like that ever since. This album is no exception, and aside from the occasional vocal diversification, which began to rear it's head in "Wrath", the album is definitely similar enough to be placed in the "more of the same" category. Not, might I add, that this is necessarily a bad thing; You can criticise the sameness of their material if you like, but it's also true that they're good at doing what they do. Listening to the album, it seems that the songs are all quite solidly written and don't contain too much throw-away material, something which the band have always managed to an extent. As always, or, perhaps, even more than usual, the band have some monster choruses, which are memorable to the utmost degree, and is definitely something refreshing to listen to on my "Right, I'm going to listen to something today that's quite accessible" days.

Overall, the album seems faster than the band's quintessential material, with a stronger thrash influence than that which was minimally present in Wrath, albeit in this album a lot better done. In contrast with the earlier material, there seem to be relatively fewer moments which "jump out". I'd say that the songs are just as good in many respects, but seldom did an intro occur to which ensnared me to listen to the song above the others. Making up for this, in a way, the middle of the songs seem to have a lot more going on, and when the mundanity of the intros has passed, most of the songs are very solid. One of the fascinating things on the record is the presence of the occasional experiment, straight out of the left-field; Tracks like "King Me" with it's symphonic keyboards really takes the bands sound in an interesting, albeit slightly haphazard sonic direction, and the clean vocals on "Insurrection" really do sound cool and interesting, even when in your heart, you know that it sounds rather sellout-esque.


All in all, for all the shtick that Lamb of God get, the new album definitely isn't too bad. All things considered, I'm quite impressed. It's not going to by my album of the year, and I doubt I'll feel the need to listen to it constantly, but frankly, it was a good listen, and to an extent, it's re-kindled my interest in the band a bit.