About two hours ago, I saw this band opening for Uncerate, and was rather impressed by them, to say the least. When the show was over, I scurried gleefully home, with a mind to chilling out for a while, and thought to myself, well... I could definitely review one of their albums. Career wise, so far, Svart Crown seem to be a fairly average support-band; two albums under their belt, but showing plenty of promise. 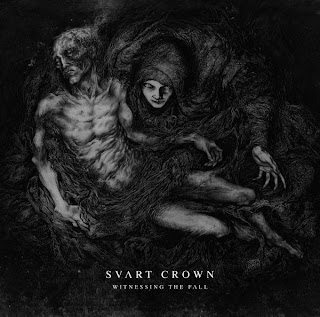 It becomes apparent fairly early on that Svart Crown's sound is ferocious, technically competent and elaborate, and takes appropriate attributes of black and death metal to make an interesting blend of highly structured, energetic and yet still sinister music. The production seems quite murky in places, but nonetheless everything is quite distinct - there's certainly less treble than your average black metal piece. The drums may be a bit produced, but this is fairly excusable, with the extend of their technical edge captured crisply, but thankfully not to the extent of making it sound plastic. The guitar style is an interesting quirk, with a lot of wah, or something like that, dispersed through the songs. Overall it's certainly more akin to a death metal production job with black metal elements thrown in. I can't claim to listen to many bands who combine the two genres in the modern sense, but I'll venture that the blend with Svart Crown make certainly falls on an interesting and pleasing part of the spectrum; somewhere to the tune of being between "death metal with atmosphere" and "black metal with balls", cecertainly showing that the two genres are much more compatible than some would imagine - I can't, myself, begin to guess which of the two the band is closer to.

Hailing from the black-metal side of the equation, the slower, almost progressive sounding creepy bridges and softer sections were really well executed, albeit occasionally sounding a few notes away from "Freezing Moon", and a lot of the album carries a real presence, an energy - or that's certainly what the band were like on stage - As soon as the lights dimmed a little, It was apparent that the local bands had finished, that something ferocious was about to be unleashed. While perhaps digressing from the album itself, but still earns mentioning. The energy is certainly apparent in the bands studio work as well, however, and the limb flailing oomph seems to bring itself to the studio as eagerly as they do the stage. Black metal often often screams demonic curses and incantation, but seldom simply "fuck you" - Svart Crown, however, no doubt with a little help from the death metal element, manage this well, and while they lose a little eeriness and darkness for it, they gain it's equivalent in crushing, wrathful attitude. I feel perhaps that this review is saying too few things in too many words, but nonetheless, seems to convey what I think I mean. They may not be ultra-inventive, but damn, these Frenchmen pack a punch.


I can safely say the it seems that the band are doing rather well, and while their rise is proving far from meteoric, slow and steady success is something I can definitely anticipate. There are very few weak moments on this album, and I can safely say I'll be listening to it some more.