Another piece of evidence on the table, alongside Bolt Thrower, that English death-metal is a damn fine brand of the subgenre, is Benediction. "Transcend the Rubicon" is a couple of albums into their ongoing career, and I can say, rather confidently, that it is a classic of the genre, for all the right reasons. 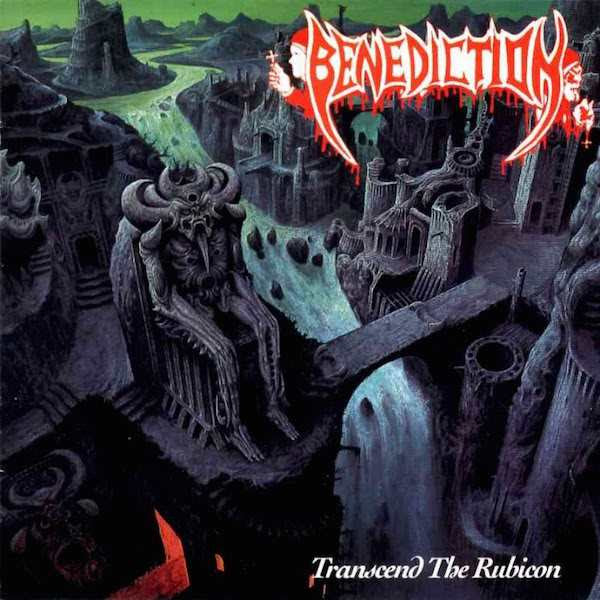 Benediction get compared to Bolt Thrower frequently, and there is good reason for this - The two bands have one heck-of-a-lot in common - The vocals follow the same path, and the riffs have the same crushing "death with a hint of groove" to them. Is this a bad thing? Most certainly not! To my ears, the two are as good as each other, and the deep bass-filled roar of the songs on "Transcend the Rubicon" exemplify this in a bone-crunching death-metal inferno. I'm definitely partial to death-metal which doesn't go overboard with blast beats, and Benediction definitely exhibit a refreshing restraint, with the drumming being tight, technical, and sounding nice in the final mix, as well as being catchy, and driving the music really well, such as in the beginning of "Violation Domain" but not crowding other aspects of the music out. In fact, the mixing as a whole is excellent - it's got that nice, organic feel of the old school, but everything is also captured nicely, with no aspects of the sound neglected.

Transcend is one of those albums which simply sounds good from start to finish, which is always something worthy of praise - It's quite a lengthy album, as well - eleven tracks (On my version, not including the two live bonus tracks) and almost fifty minutes is quite a lot of death-metal in one serving, but when the consistency and lack of filler is taken into account, it's damn impressive. Coupled with the lovely cover-artwork, the album oozes an aura of completeness and solid foundation, which, while not necessary to the song quality, really seems to boost it up in terms of appeal in the way that it practically demands to be enjoyed and treasured. One of the consequences of the way the riffs are done, is, pleasingly, that it demands the vocals to have good  twists, and the vocal hooks are more memorable than your average death-metal album, and in addition have very rhythmic character, which provides plenty of emphasis on them, and hammers them home pleasingly.


It's not suprising that I enjoyed this, Bolt Thrower fan that I am, the similarity can only be advantageous to my ear, but whatever you're into, It can only be a good idea to have a listen to some Benediction. I only wish that they'd blown me away sooner, but I overlooked them for some time.