Time for the second Norwegian black-metal re-recording album in a row, this time, Gorgoroth's re-recording of Under the Sign of Hell. In a run-up plagued with delays to the release date, fuelled by problems at the record label, the album is available on the band's tour, and is scheduled for proper release fairly soon. Whether the bands fans will be pleased about this, however, is up for debate. 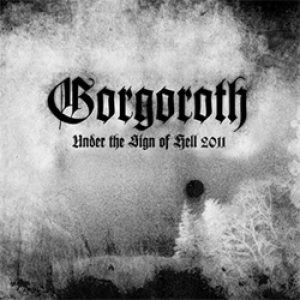 Gorgoroth definitely remain energised and strong in the release, and it's obvious that they are capable of keeping up the onslaught which the original Sign of Hell gave. The problem with the re-recording, aside from how unnecessary it feels, is that the black metal "spirit" of the band is definitely not audible in the album - It's sterile, and lacks the crushing, candle-lit and frosty production which makes black-metal good - while the technicality of the album remains - they are after all, the same songs - the atmosphere is very much lacking. The drums are too crisp, and the production in general lacks the echoey, reverb filled and utterly black-metal production which made the original, and the albums around  it, which, frankly, got me into black metal, great.
The album sounds good in some places, with songs like "Profetens Apenbaring" sounding reasonably well done, although this, in part, is down to the fact that it was more of a punchy song than the others, and the production suits it marginally better.

The intensity is still there, which is a good thing to see, although that adds more to my hope that the band could unleash a genuine comeback if only they get their current trend in abominable production out of the way, than to my enjoyment of this album in particular. Perhaps if this had been original material, it would have gotten a lot more praise, but when compared to the original, it just doesn't stand up as it should. It's reasonable of it's own merit, but in this case, own merit doesn't really cut it. It's clearer, and the technical elements of the music are laid bare to see, much more so than before, but that's done at the expense of the atmosphere to a great extent, and the fact that albums which combine both effectively do exist really detracts a bit from what's been achieved in terms of clarity. I'm not going to outright condemn the album, as always, it was enjoyable to hear songs in a different light, and I cant deny that I enjoyed the occasional section here and there, but I'm definitely going to admit that it could have been better, and as a massive Gorgoroth fan, I'm somewhat disappointed.


Some re-recording albums work. Some don't, and while this isn't an outright dog's dinner, it's not what it could have been, by any stretch. The overclean production wears off after a while, and it's tolerable, but it's certainly no substitute for the original.