In modern black-metal, one of the trends seems to be that most of the bands which have a very oldschool black-metal sound do not have the musicians to play live - instead being composed of a few multi-talented members. Koldbrann are not one of these bands, and through their career so far, they have had a full enough compliment of musicians to perform live shows, something which seems important to me. "Nekrotisk Inkvisition" is one of the most... Kvlt... album titles to come my way in a while, and the sound is equally true black metal. 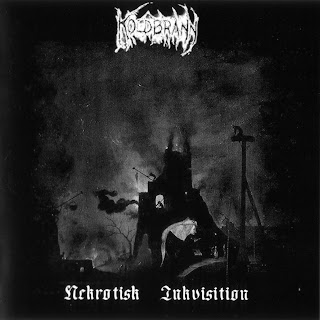 In terms of sound, this album could have burst straight out of 1994. The guitars are evil, cold, and hissing, but also chunky, and there's a tough and prominent lower end in the music, which gives it a lot of strength which isn't apparent in some black-metal. The sound is very much recognisable, although it may be a bit far to refer to it is quintessential; It doesn't seem fitting, when there are certainly some unique characteristics in the band's sound - and enjoyable ones at that. I've not heard quite the same guitar tone anywhere else, and it's a damn good tone at that. The riffs really cruise along, sawing and rasping angrily, but also with a well carried atmosphere, a good balance between the intensity and freezing atmosphere; "Koldbrann" itself is the Norwegian for frostbite. All in all, the album sounds very well rounded in terms of production; natural, organic, and un-forced. The band stand against the use of drum-triggers, and their earthy production ethic is definitely reflected in the album, which is smoothly, but naturally mixed and produced.

It's definitely a hidden gem of modern black-metal. Perhaps not a band who are looking to the past for inspiration too much, but definitely one who feel the need to unleash it with "proper" sounding traits. With black-metal, it could be said that they "don't make 'em like they used to", but Koldbrann certainly seem to be trying and succeeding. It may not adopt any wild new direction for the genre, but it certainly keeps the original spirit of black-metal as straight as an arrow, and what's not to like about that? It's cold, sinister, off-the-beaten track, and evil as hell, and that's how black metal was meant to be, and it's as good coming from 2003, as it would have been ten years before that, but most of all, it's honest - there isn't a twist, an aspect of the band which changes the perception of it - it's a straightforward black-metal outfit, playing straight forward black metal, and it sounds good.


This is definitely a riff filled, black-metal monster of an album, and each song has a great degree of integrity and raw, unrefined purity. Bands like Watain may be keeping the genre in the spotlight, but bands like Koldbrann are the ones who are keeping us well supplied with black metal like they made in the olden days.