Sargeist was formed by bassist/guitatist Shatraug, who, judging by his entry on metal archives, seems to have played in more or less every black-metal band to walk the earth. Initially a solo project, the band seems to have picked up members along the way, and by this, their third album, have gotten to a point of being somewhat fully fledged as a band. 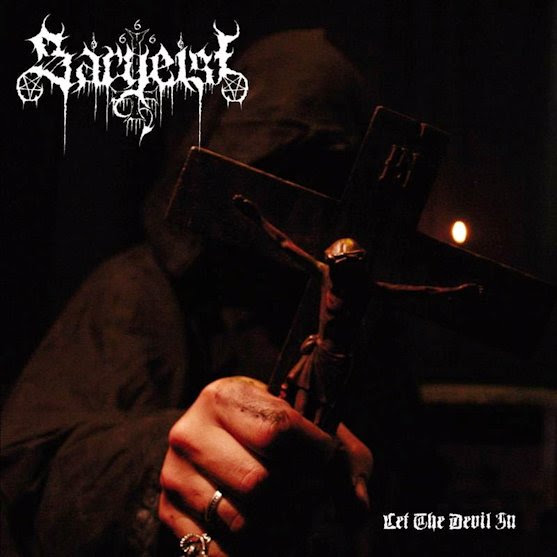 "Let the Devil In" is, from the onset, undeniably oldschool, pure black metal, untouched by synth and other such elements. Despite the lack of these things, the album still manages to evoke an excellent atmosphere, full of fear, darkness and misanthropy. Sargeist have consistently reminded me of early Gorgoroth, with evil-sounding, riff driven songs filled with atmosphere but also energy, in such a way as to make a song which is not only heavy and evil, but also one which is majestic - the well placed melodic elements of Sargeist's music also add to this, creating a work filled with both majesty and malice. The atmosphere is also vocally bolstered, with a little reverb on the vocals giving an unworldly feel. The vocals also soar over the top of the music, which makes them more clear than many black metal bands have them. The variety of tempos in the music is also pleasing, adding a good sense of variety to the songs, with pieces such as "Nocturnal Revelation" getting off to sinister, slow starts, even if the song title does make it sound like an euphemism for something.

The album is definitely one which takes a degree of listening to get into, with many of the songs blending a little bit on the first listen or two. However, after a while, the album became immensely enjoyable to me, and frankly, De Mysteriis took some getting into as well, and it's iconic. "Let the Devil In" is certainly strongly constructed upon close examination - theres not a hint of filler, and each track has merits. "Discovering the Enshrouded Eye" embodies pretty much everything I like about black metal, combining the rasping, ominous riffs reminiscent of early Gorgoroth with the eerie and transcendent tremolo picking used by Mayhem. Other tracks, such as the eponymous "Let the Devil In" take an interesting approach, in this songs case, most of the lyrics are devoted to the repetition of the single phrase "Let the Devil In!", which makes the song notably memorable and catchy.


While not making any massive innovations to the black metal style, "Let the Devil In" is one of the most pleasing black-metal albums I've heard in a while, and it can truly encapsulate the style, through it's variety of sound. I thoroughly recommend it.