I haven't listened to nearly enough grindcore in my life to consider myself to have any great knowledge of the genre, however, I'm not so naive as to miss a classic, Napalm Death, heralded by many as the founders of the genre, with their debut album, Scum. 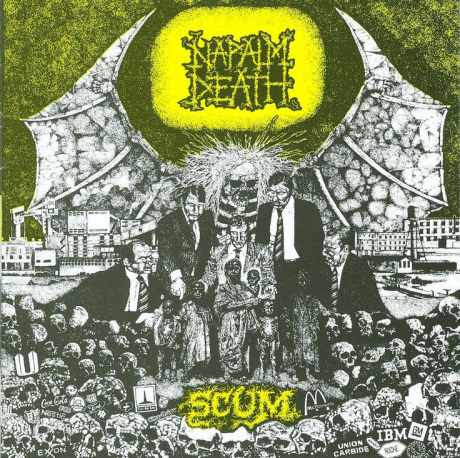 Believed by many to be the first grindcore record, Scum has many of the signature features of what would later be recognised as such - fast tempos, brutal, difficult to decipher vocals, and short-as-heck songs. Napalm Death manage to cram 28 tracks into about half-an-hour, with each one being as raucous, brutal, and displeased with society as the last. The hardcore punk element of grindcore is very apparent from the onset, for instance, "Instinct of Survival" has a strong punk edge, which to an extent displaces the heaviness in places. Each song individually is not a hugely powerful entity, being short and often somewhat simplistic, but the "safety in numbers" approach adopted by Napalm Death, and many of the bands in the genre, give the album as a whole an effectiveness, with the occasional memorable island, usually a longer song, such as "Siege of Power". One obvious, and famous exception to this being "You Suffer", which is a whopping 0:01 in length, and is hailed as "the shortest song in the world".

The raw, archaic style of grindcore played (and pioneered) in the album is extremely pleasing - the tinny, unprocessed drumming, the muffled guitars, and the shouted, wild vocal delivery blend to create a hugely enjoyable listen, with a charm which not many bands can match. While the production values are extremely rough, they really would not suit being any other way, and they excellently compliment the sound, and aesthetic, of the at the time, emerging genre. The deep, rolling-oil drum sound which the band produce being one of my all time favourite musical tones, and there are more songs of that style in one place than I have ever heard before, and critiquing the album, the huge influence which the band had upon just about every extreme metal style, from black metal to brutal-death-metal, is glaringly obvious. In terms of influence, Napalm Death are like a latter-day Venom.


There's little more to say, frankly. I usually try to shy away from absolute-classics, in fear of having little to say which hasn't already been said, but there's no denying that that is what "Scum" is. Utterly and Irrefutably classic.