Baptized in Blood are one of those bands who have had a meteoric rise to being relatively well known, no doubt much to do with now being managed by thrash-metal-god Dave Mustaine, who no doubt helped them get a fairly lucrative signing with Roadrunner records, who, while not being among my favourite labels, is definitely worthy of report. 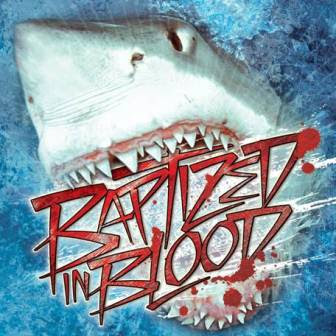 I've seen Baptized in Blood often heralded as "party thrash" but in all honesty, I dispute this somewhat. I hear mainly reminiscent of  melodic death metal, with a strong undertone of thrash, in a similar way to Lazarus AD's debut. Nonetheless, lyrically, Baptized in Blood is a catchy, fun-filled affair, definitely party orientated, and quite memorable, or conceivably so, after a couple of listens. The musicianship is solid, tight, and stands up nicely, especially for a young band, even if the production values could have captured it better, the mix being a bit sterile, and and the drums being quite clicky and very much overproduced (althogh nothing like as bad as some) The thrashiness becomes more apparent through the album, with the opening track sounding rather too generic and uses-friendly, but this quickly dissolves into slightly more aggressive, overtly "metal" sound, although the whole album is rather un-inventive, sounding much like the thousands of other similar bands in existence, but in all honesty, if they continue to do what they're doing, as well as they are, I'd wager they're set to outlast a lot of the bands that contribute to the sounds sheer generic character.

The vocals have quite a pleasing edge, after listening to them for a while - a sort of Chuck Billy meets metalcore affair, which often have a deep rumble to them, beneath the high-treble scream, which I must say helps the catchiness along, and keeps the music from falling over the metalcore fence. Some of the lead guitar is rather impressive too, and throught the release is very well packed with melodic elements, solos, and other such trimmings, which make it a technical success, but perhaps take away some of it's raw energy. It's always been my opinion that sometimes the rhytm guitar needs some time alone to sound deep, manly and badass, and seldom in this record is it given much space to breathe. In the right mood, however, the melodic elements can be appreciated, as they do possess a certain virtuosity.


I'll be the first to admit that this isn't my first choice of metal-style to be listening to. However, Baptized in Blood certainly possess a certain charm, and some damn strong tracks, to boot. While on a person level, this doesn't exactly get into my top-ten , I'd recommend this album to legions of people I know.

I give the album, based on personal taste, 6/10. However, from a global perspective, It's definitely worth much more than six.