In my interpretation, the fourth album of many bands marks the barrier between being a new-band and a well-established band. Toxic Holocaust's fourth offering "Conjure and Command" seems to fit into this framework quite nicely, and it has the sound of a band which has continued to mature and grow since it's predecessing albums. 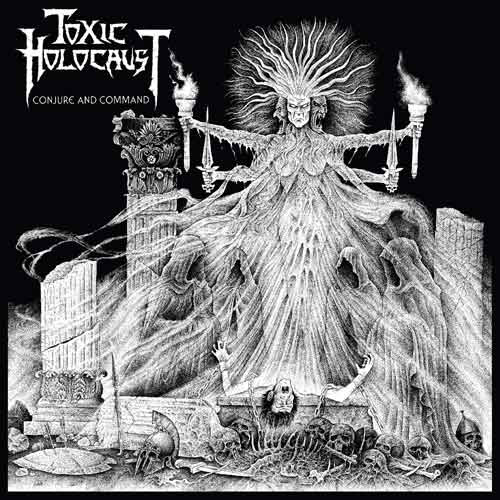 While some of the songs may not be as fast as the songs in the albums predecessors, they possess a great infusion of energy, suggesting that Joel Grind's songwriting is going from strength to strength, with more powerful, moshable and down-right badass riffs than ever before. There is also a lot more lead work, with emphasised solos. Having other full-term band members for the first time certainly seems to have lead to a synergy of ideas and musical intentions which the band's existing sound, creating something which is in the style of, but slightly more organic sounding than the previous albums, with many subtle changes thrown in. Vocally, Grind has diversified somewhat, making use of his traditional snarling delivery with a partially sung vocal style very much in the vein of Cronos of Venom, which he makes use of in tracks such as "Nowhere to Run" to great effect.

The lower tempo of some of the songs, instead of spoiling anything in the album, distinctly adds to it - The slower parts add attitude, diversity, and atmosphere, making for a much more varied thrash-album than the band's previous works. Production wise, too, this album could potentially be my favourite. The guitar sound is wonderfully crunchy, and all the instruments seem extremely suitably produced, encapsulating thrashiness perfectly. The booklet which comes with the album proudly states that "Absolutely no drum replacement, triggering, quantitizing, or amp modelling were used in this recording" and with the way the album sounds, I wonder why so many bands feel the need to use  these entities, as Toxic Holocaust seem to manage to make a damn nice sounding album without them.

The album blends the old with the new, certainly. While unmistakably a Toxic Holocaust record, changes have certainly been made, and this fact is emphasised by the change in logo, which I found a little disappointing. Sound wise, however, the changes pleased me, although I cannot guarantee that all shall share that belief.

I give the album 8/10. The band is still going strong.