Not many albums bring the phrase "cult classic" instantly to mind to the degree which Vektor's "Black Future" does. The band's second release, their first to have support of a label, this album blends thrash with progressive elements to create something somewhat unique, and enjoyable for it. 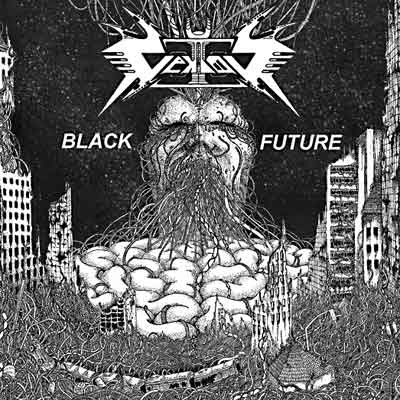 Despite the "progressive" tag, the album does not contain any of the hoity-toity nonsense which can render a lot of progressive metal unlistenable - instead, Black Future is unquestionably fast, aggressive and moshable when appropriate, with the progressive elements seeming more to add a flair to the sound, as opposed to saturating it. The character of the whole album tends to combine the tried-and-tested with a flash of new thinking - The spacey, sci-fi and practically Lovecraftian aspects of the lyrics and sound are certainly not new to thrash, but are done in such as way as to compliment each other more so than one might see in most bands. most of the lyrical themes, the band's sound, and the artwork all fit into an aesthetic which is summed up by the album's title - "Black Future"  While varied, the vocals are typically harsh, occasionally punctuated by extremely high shrieks, reminiscent of fellow prog-thrashers Anacrusis. this  vocal style works a lot better than melodic, sung vocals would in it's place, on this album.

Musically, the album is haunting and  apocalyptic in the atmosphere it evokes, and the instruments driving this atmosphere are blisteringly tight, with magnificent leads, hair-raising speed, and absorbing melodic passages in which the tone is utterly optimal. In the latter, the bands use of progressive elements truly shines. The production also seems excellent, being extremely tight in capturing the music, but not sounding artificial in the slightest. Even the artwork of the album is fascinating - having a style that few modern thrash bands would partake in.


All in all, "Black Future" seems to be an album which was blessed by fate. The songwriting, aesthetics and ideas behind the work, as well as the production style, make it a perfectly formed album, and I cannot fault any of the album on it's own merits.