For some reason, I encountered the works of New York's Havohej disproportionately early on in my exploration of metal, inevitably resulting in a "what the fuck is this?" style reaction. At the time, the music felt quite inscrutable and unappealing; a bit much for me, lacking much of what I was looking for. Times change. Perhaps I was not equipped, then, with the ear to enjoy it, or alternatively, my taste has since, itself, changed to incorporate it; pick an interpretation congruent on one's understanding of how taste works... The point being built up to remains; that much more recently, I have revisited the "Dethrone the Son of God" album, and upon a second listen - and many subsequent listens after that, it has revealed itself to be a very enjoyable work of American black-metal, an achievement which, in the eyes of some, is a rare thing indeed. 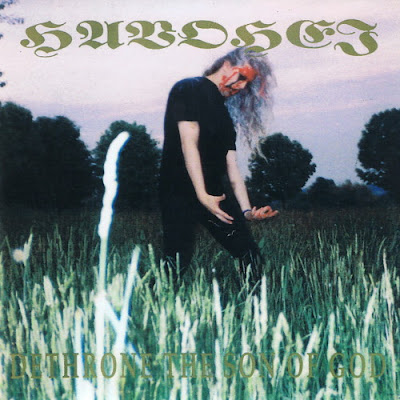 There are times when background-knowledge can greatly change the experience of listening to a piece or collection of music; not always changing one's perception of the sound itself outright, necessarily, but certainly holding the potential to enrich the experience. Having already listened to "Dethrone the Son of God" a couple of times, I proceeded to read-up on Havohej some more, as I tend to find such an activity to do precisely the above; to enrich the mere listening. On thing which comes to light almost immediately is the position in which Havohej stand in relation to the grander scheme of extreme-metal. At first I had assumed the project was relatively isolated in terms of its integration into any sort of scene; located far, for instance, from the day's embryonic second-wave of black metal in Norway. It emerges, however, that "Dethrone the Son of God" is an album comprised largely of unused Profanatica material. Who are Profanatica, you (and I) ask? Profanatica are a band comprised of ex-members of Incantation - leaving Havohej very few degrees of separation from all sorts of interesting things which I had become enthusiastic about between first hearing Havohej and revisiting the music so much more recently. While it can be granted granted that I could have written a review of this album without knowing that, instead focusing entirely on the music, having discovered the context in which Havohej exists puts an interesting spin on the listening experience. Not least highlighting the project as being very much among the many profane and murky dark offerings vomited forth by the USA's Eastern Seaboard at the time, as opposed to an outlier.

Indeed, this influence, once the seeds are planted in the mind, shows through on the record itself. The crushingly sluggish sections and the perturbing and hellish swagger of the record's locomotion reeks of the occult death metal style which remains so popular. In tandem, the record carries with it a scathing and treble-heavy scythe of blackened filth; raw and flaying, coated in spiderwebs of high-tremolo and an at times frosty distortion. These factors conspire to give it a liberal steeping in the very tar of black-metal, beyond all doubt enough to happily consider that to be its main genre, whilst nonetheless allowing for a record possessed of great distinctiveness; for its rawness, profanity, its relative minimalism, and its inventiveness. It is a record decidedly and enjoyably amid its genre, but by no means generic in respect to it; quite like - and quite unlike - its peers. It is an unusual and chimerical beast; intense and grim but also purposefully jarring and at times extremely rhythmically interesting; squirming and writhing as the bass takes a relatively prominent position throughout the album, warbling with an intricate and foreboding allure below the surface, less distorted than one might expect, particularly on the first half of the record - produced slightly differently from the second - but equally effective. The percussion, likewise, makes itself known by its distinct and at times deliciously unorthodox clattering; dreadfully clicky in places, to the point of almost breaking the spell, but its negatives are at least outweighed in that it serving to further enhance the album's bizarre and deliberately unpleasant aura, the percussive equivalent of an unpleasant metallic taste in the mouth.


"Dethroning the Son of God" is, of course, not meant to be an album of pleasantness. Instead, it is a record of profane filth and impurity; and in this role it wallows contented. It is a record which is primitive and ugly, casting the evil spells of black-metal with far greater legitimacy and non-contrived vitriolic hideousness than most; one of the few albums which truly captures the essence of the genre's darkness in earnest fashion. A certain mood is required to enjoy it, I found, but enjoy it, this time around, I certainly did.