"Revengence"- which I suppose must mean the vengeance wrought upon those who avenged themselves upon you after the first time you had your revenge - marks the third full-length studio album by UK doom titans Conan. And titans, indeed, they are; one of the country's greatest current assets to the genre, and a band who have risen to a level that few do, especially given the time-span in question. The last five years or so has seen the band carving a place as a globally well-known name and a legitimate headliner wherever they choose to go, standing out from the burgeoning and crowded UK doom scene with an originality and uniqueness which often goes unnoticed to the inattentive listener. With their third album settling into its spot on the shelf nicely, no longer feeling like a bizarre extra limb, but rather a meaningful component of the Conan corpus, the time to review is upon us... 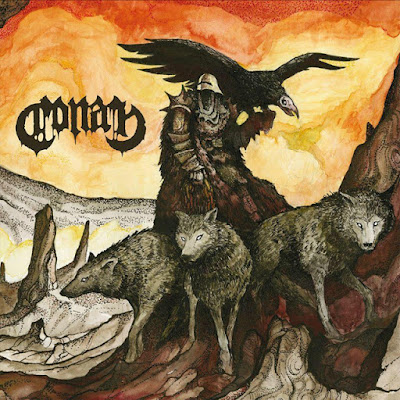 In a time before the internet, album art was of paramount importance; or I've certainly always thought so. On one hand, an album must be eye-catching, visually compelling, especially in that record-store environment of old - you must, in short see the record sleeve, the CD front, the cassette, whichever medium it may take, and think to yourself, "I want to hear this.". Secondly, good cover-artwork stands as a statement of the integrity of the music contained therein - a woe indeed it is to see albums where the artwork does the music injustice. Visual aesthetics remain, to my mind, as important as ever; record-store shelves oft replaced by the recommended-videos section of YouTube, the feed of Facebook, and so forth - visual aesthetics did matter, and still matter. And, to finally get to the fucking point, Conan know this. "Revengeance" stands, visually and musically speaking, a proud extension of the band's body of work; the desolate landscapes and ochre-washed primordial brutality of the artwork immediately aiding its inclusion into the set of the bands records, promising -and delivering - stylistic continuity. It is continuity which is indeed seen to be the case upon listening to the music; the same unfathomably heavy and hostile sound; gargantuan pillars of noise gnashing slowly like geological teeth, in a way familiar to all fans of doom, but executed in a way quite unlike any other.

On that subject, I've seen Conan decried as generic - a view in which, as far as I can see, is misled, unless my knowledge is truly lacking. Zero Tolerance gave their second record, Blood Eagle a zero-score some years ago, which struck me as somewhat illustrative of whoever wrote it having completely missed to point. The primitive and minimalist arrangement of the bands music carries an atmosphere which almost no other bands are creating; a primordial mountainside of wailing, soaring and disembodied vocals, and riffs which - as I've mentioned in previous discussions of Conan - sound almost akin to music instinctively and viscerally created, pounded on taut animal-hides and stones in a bygone time, whilst evading predation by the enormous creatures no doubt stomping the face of the earth. That sound is a concoction every bit as much subverting the norms of the doom genre as invoking them, particularly with the bands relatively energetic and forceful choices of tempo. This trademark sound reappears on Revengeance. This isn't to say that the album is simply another carbon-copy brought forth from the same cauldron, however. The retention of the fiercely rhythmic potency of the music is met with the signs of a slow and self-aware evolution. Sure, Conan could probably make the same record repeatedly and a certain crowd would adore every single one, but the nuances and variations from previous tracks is a sign that, while not gratuitously reinventing themselves - and thank goodness for that - Conan are more than happy to continue to explore the boundaries musical lands they claim as their own.

"Revengeance" is a welcome addition to the bands discography; the accustomed heaviness and atmosphere taking the listener once again to that desolate place that the band has taken us before. It is a record liable, I expect, to be remembered in years to come as being among the bands classic works. The album mirrors the virtues of its predecessors, reprising everything which the band have grown to be known and enjoyed for, whilst evolving their sound sufficiently not to come across as stale. "Revengeance" is different. Just a little different, but there is enough change in the air - in the form of a well thought-out, logical progression - to capture the interest even more so than it would if it were simply a competent but identical continuation - and heck, I'd have already been happy with merely that. A slow evolution, it must be granted, but slow is an entirely understandable rate for a band who sound so very, very cyclopean.