Quebecois outfit Voivod are one of the most bizarre bands that ever flirted with the "thrash" label. Indeed, trying to label Voivod as anything may well be an unwise move, as much as it might be tempting. One need only take a gander at their string of classic records from 1984's "War and Pain" through to 1989's "Nothingface" - and beyond - to be presented with an illustration of a their unbelievably idiosyncratic and enjoyable penchant for variation. Voivod are, for my money, a band who underwent one of the most fascinating and meaningful evolutions in metal; throughout their classic era, every single record was such a change, and yet such a rational evolution, from the one before it. This review will take a look at the record with which the bizarre odyssey all began; "War and Pain". 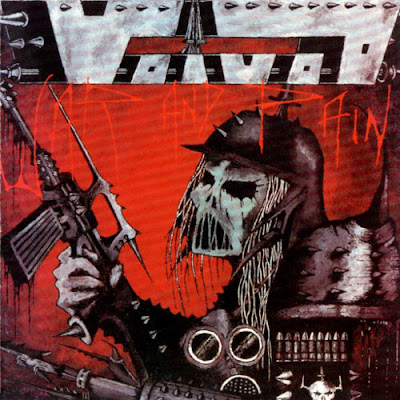 1984 was an interesting time in thrash - a muddled and exciting world; a lawless wild-west of potential influences, in a genre which was only just starting to codify rules for itself. "War and Pain" certainly serves to render the year even stranger. An already shining example of Voivod's bizarre and unique aesthetic, the album succeeds in simultaneously being primitive, unpredictable, and uproariously enjoyable throughout. An expression of the band's long-running musical spirit, whilst remaining relatively unique even within their own discography. The record's sound owes as much to the precursory influences upon thrash as it does to any contemporary peer in the genre: The music reeks of the hardcore-punk influence of Discharge, the bulldozing snarl and frantic sound of Venom, and at times, even the chilling and gloomy styling of early Black Sabbath. All of these factors integrate into an album of many dimensions; not merely a primitive neck-cracker, nor merely a captivating exercise in the bizarre, but a diverse and multi-faceted amalgam; delivering a vicious energy which does not steal the spotlight entirely for itself - although the record could well be fully appreciated along that vector by some. Instead, the youthful piss-and-vinegar spirit of extremity hosted within early-thrash dances comfortably with an interspersion of twists-and-turns which make the music not only energising to listen to, but also exciting to analyse - to wonder at times out-loud "what happened there, musically?" as strange quirks begin to writhe out of the record's conventional shell.

The ferocious and dominating bass-tone grants the music a thickness, extremely hefty lower-end, and a crunching, bone-crushing snarl; a heaviness greatly in excess of most of the thrash contemporary to it, and adding additional power to the post-apocalyptic havoc that the music evokes; the imagery of twisted metal and angular retro-futuristic horror compliments the sound of the record perfectly. While perhaps embryonic in terms of Voivod's sound, the album is likewise one of their harshest and most unforgiving. The frenzied approach and ragged production, across the board, injects the entire record with a sneering punk-spirit, coupled with a musicianship which reveals itself to be more and more able with subsequent listens; the record is primitive, but far from inept - in retrospect a hugely foreshadowing factor in the increasingly progressive and bizarre music which the band would create in years to come. "War and Pain" may not be the archetypal Voivod record, but it is one crammed with musical merit nonetheless.


"War and Pain" is a great example of what can occur when a band arises quite some distance from the hub of a musical movement or scene. Doing so can frequently have extremely interesting consequences - and without a doubt this is the case here. War and Pain is one of the great outcasts of early thrash; challenging, bizarre, and extremely comfortable not to conform to any standard that was emerging at the time. The opening salvo of a career that stands among the most inventive and creative in the entirety of metal.