There was a UK band in the early eighties who had albums produced by Algy Ward, Lemmy Kilmister and Cronos, respectively. The other day, I spent quite a while trying to remember which band, specifically. As it turns out, the band I was trying to remember was Warfare. The three aforementioned producers do a very good job of foreshadowing the sort of sound that the band had - nasty and sneering; not standard NWOBHM by any stretch of the imagination, even if they were associated with that movement. Indeed, by the time they reached their third record - the one I'm going to review - the band had most of the leanings of a speed/thrash metal band, with the angry limb-flailing energy appropriate to the style. Regardless, I'm always fond of finding the hidden gems; the bands who gave every bit as much, but are remembered a little less than their peers. 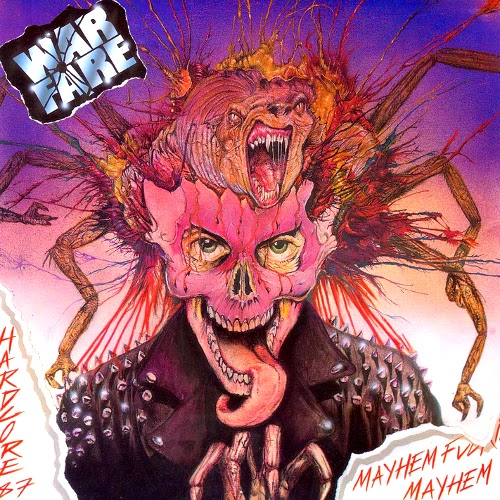 Mayhem Fuckin' Mayhem isn't pretty. It doesn't sound pretty, and by God it has literally no intention of being pretty. Hopefully, that's not what you're looking for. If the people who produced the bands back-catalogue doesn't give a clear enough idea of what to expect, the music itself certainly offers up an instant and blistering mission statement. It's course, rough and nasty. It's a metal-record which other metal-record's parents discourage them from associating with. While plenty of bands in the early and mid eighties were flamboyant and flashy; edgy in some measure, half of them seem innocent and squeaky-clean by contrast to something like this. Mayhem Fuckin' Mayhem seems more at home in a supermarket car park, committing acts of minor vandalism with its thorny, ne'er-do-well peers; Black Metal, Filth Hounds of Hades, Orgasmatron... the albums which never felt like they were for nice people. Personification aside, the record is is one which ought to appeal to anyone with old-school sensibilities. Mayhem Fuckin' Mayhem is deceptively tight and accomplished despite oozing punk-spirit and an unapologetically filthy aesthetic. It's somewhat harsher than both Tank and arguably Motörhead, and more musically accomplished than Venom - combine this with in-creeping thrash influences and the result is a breakneck-speed leather clad storm of a record with it's bludgeoning force only amplified by the solid musicianship.

The production of the record is certainly very appropriate; the drums are crisp, but in that organic old-school way, as opposed to sounding artificial. The guitar and bass weave very effectively into one another, with a cruising, rushing sound - a product no doubt both of the influence Venom had on the band sound-wise, and the influence of Cronos as a producer - and while the album has better production than any Venom record of that time, it shares with Venom all of the snarling and rough-edged appeal which production of that style brought - it has that very same manic, raving magic. Indeed, albums like this are certainly as far as you can push heavy metal without it being outright thrash - laying down a sturdy and tasty template, in which many satanic speed-metal outfits and filth-encrusted metal-punk acts would be cast and forged, to this day. Indeed, Mayhem Fuckin' Mayhem is every bit as nasty as a lot of the real hard-hitters of the early-to-mid eighties, but at the same time, it keeps a steady hand on the catchy leanings of traditional metal. At time's it's even melodic, in its own way - or, at the very least, damn memorable and hook-laden. It's an album which isn't afraid to go full-steam ahead, and it makes one hell of an infernal racket as it does so. The best
albums often do.

Cult classics tend to remain cult-classics. That, however, is not to say that one cannot join the cult... and I certainly have. Albums like this are what keeps me excited about metal; the prospect that around every corner, hiding in the bottom of a dusty treasure-chest in a dungeon far away, or perhaps more plausibly in a tattered sleeve in a second-hand record store might lurk something special. Something like this, just waiting to be found. There's always plenty to listen to, if you look hard enough, and I'm glad I looked. Every second spent trawling Metal Archives muttering "what the fuck was that band called again...?", validated.