In a realm flanked on one side by the top-tier mainstays of the genre and on another by the fashionably new and obscure lies perhaps my favourite part of the black metal spectrum at the moment. The reliably expansive, exciting and diverse realm of the black-metal midcard. An area, I would go so far as to suggest many people neglect needlessly. Until recently, I certainly did - jumping straight from the entry-level bands to the flavour-of-the-month ones, without dwelling very long betwixt the two. Judging by the quality of the bands herein, however, it's a mistake indeed to go without exploring a bit more, and that is precisely my plan for 2015; to return to that shadowy land for some much needed filling-in of the gaps - and vast gulfs - in my knowledge of the genre. Pleasantries aside, Fuck the Universe. 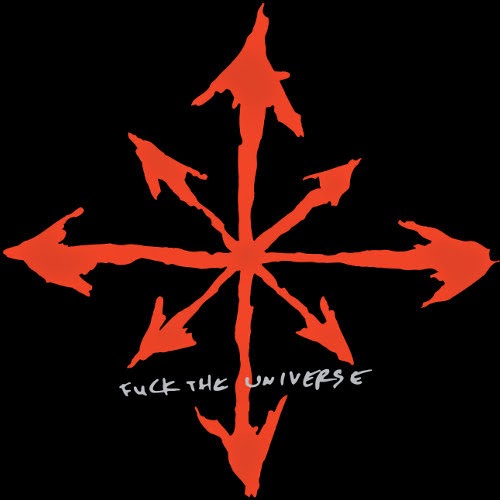 Sweden's Craft aren't apt to mess around, and that includes their artwork. "Fuck the Universe" is about as to-the-point as black metal albums ever get - metal records in general, for that matter. Sonically, too, Fuck the Universe isn't an album which spends too much time investing in anything superfluous; it's a deadly simple recipe which works perfectly. It has everything it needs to cleave a path of destruction, but it's a lean and efficient beast nonetheless. Clattering drums and vicious steak-knife riffs with a sand-paper tone to carve at your flesh, whilst flourishes of devilish high-notes which feels like a demonic tongue lapping at the inside of your ear. The album both manages to capture the large-scale and atmospheric properties of the genre, reeling and unspeakable, but also succeeds in reconciling them very smoothly with the deeply visceral tetanus-inducing barbed-wire of the genre's angrier, filthier side. The bare-bones, deeply abrasive sound which Craft cultivate is one which appeals to a wide range of black metal sensibilities, providing frigid cold, but also wrath and misanthropy, even a more devilish element; in short, the band tick a lot of boxes, and in a timeless way, too; this could as easily be a record from almost a decade earlier than the year it came out. It's a very organic album, and a case study in why that very thing is generally good news.

The slow sections in particular - I'd go so far as to call them Craft's signature style - are extremely enjoyable to listen to; few bands manage to wallow so successfully in the undulating pits of mid-tempo hell, but Craft manage with gusto. Powerful cruising sections seethe and slither like a cauldron of barbed serpents. It's almost black n' roll like. Almost. Not so close as to create a potentially jarring juxtaposition between the savagery of black-metal and anything upbeat - a territory which Craft make damn sure to avoid. Mid-tempo is often underestimated, and albums like this demonstrate why it always has a place. The execution of the record is very solid indeed, both in that the musicianship is spot-on, in so far as it's thoroughly appropriate to the rugged edges and sharp splinters which the sound works best with, and production wise, too. The album is brought to a level where it is truly bursting with substance - the thick, loud and scathing tone exhibited throughout delivers a huge amount of force, and embodies the evil of the music perfectly. It's a record where nothing is wasted; each section is enjoyable in its own sake, from the hellish tremolos right through to the thunderous, muscular side of the record in which huge, evil chords are allowed to ooze and dribble with malice; definitely one of it's finest points, and while not to the detriment of the faster sections, the swaggering Celtic Frost influenced exuberance is definitely the aspect that comes to mind when I think of Craft, and the aspect which has embedded Craft into my black metal vocabulary.


Fuck the Universe is a record which brings together many of the elements which made me realise I enjoyed black metal in the first place - and as a listener, I can't really ask for more than that. Some might preach diminishing returns with music; the most you hear, the less you're likely to be impressed, but for me, I'm finding the opposite to be true at the moment. Black metal sits before me a ripe and appetizing swathe of music which, despite being a fan of it for many years now, holds so much more to explore - so much potential. How much music you can find to enjoy is limited only be how hard you look for it, and I don't know about you, but I find that damn exciting.