As so often is the case, over the last decade or so Queensrÿche have perhaps been subject to more discussion regarding their internal fallings-out and legal issues than discussion of the quality or lack-thereof of their musical output itself. However, as much as the band - for a time - may have been in a bit of a rough-way, it's always better to focus on more positive things; and few are more positive than "Operation Mindcrime" - one of the records which cemented the band onto the map in 1988, and indeed an album which is considered by many - my sources tell me - to be one of the greatest concept-albums in metal. 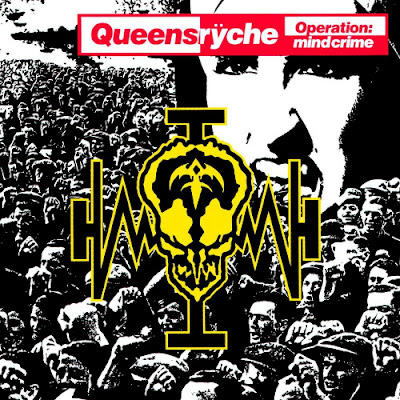 To an extent, Operation Mindcrime is something of a template for the metal concept-album going forward; a template which is often imitated, but seldom replicated. Making a concept album certainly seems to be a difficult affair, considering how many bands try their hand at it, and then don't come out of it well. Many a time, the ambition is there, but the musical quality to back it up is not - concept albums can be good, but are very seldom great. Operation Mindcrime, however, is a sure-fire contender for greatness. The making of a concept-album is a game of balance, and in this case, it is rather well struck; enough narrative and well-distributed flavour-material to tell the story that the band intended to tell, but likewise a record replete with songs which are tastefully independent and well-formed. Operation Mindcrime avoids the trappings, for the most part, of having tracks which exist solely to further the narrative as opposed to bringing musical quality and integrity; avoiding, in short, an unnecessary saturation of contrived ostentatiousness. There are, through the whole hour-or-so, few throwaway moments. The majority, indeed, the vast majority, of the flamboyant and slick splendour of the album speaks for itself with or without the relevant background knowledge of the story, but also weaves together neatly; it's the sort of situation in which you can almost infer that it's a concept album without outright knowing so, or even attending to the lyrics. The aforementioned balance is crucial; there are enough motifs and running themes throughout to bind the record into a narrative entity, but without forcing that same entity to be grey, dull and homogeneous through sheer determination to unify it. It is, in other words, a rewarding concept album when you want it to be, but it won't suffer when you'd rather listen without that in mind.

Musically, the entire album consistently presents me with the sort of things I enjoy; running the gamut from massive synth-steeped long-runners like "Suite Sister Mary" which deliver the most narrative aspects, to the leaner "Electric Eye" style dystopian Judas Priest romp of "Spreading the Disease". The record combines the flair and pomp of quintessential 80s metal with an inventive and progressive streak a mile wide, resulting in an album which is flawlessly intricate; awash with subtle technicality and swishes of the musically unexpected, as well as in many places being exceedingly catchy. "Revolution Calling", "The Needle Lies" and the anthemic closing swansong "Eyes of a Stranger" all likewise stand as exceptional specimens of good heavy-metal, alone or in context, with the whole record running through a spectrum of a dozen approaches to heavy-metal in order to tell its tale successfully. The musicianship really brings these intentions to life; with a flawless vocal performance by Geoff Tate - purportedly unheard-of these days - and masterfully played and produced musicianship by the rest of the band, entwining the record with itself magnificently; sleek and restrained, even for all of its many flourishes. It is often understated just how effective good musicianship can be, with albums sometimes being seen as somehow separate from their creators, but here the quality and skill of the musicians involved is a gleaming jewel in the records crown, bringing as much enjoyment as any other element - beyond the on-paper idea itself, the execution of the record is marvellous; in many respects it is good because the musicianship is good.


"Operation Mindcrime" was, this year, one of a select few albums which, upon encountering them for the first time (and late indeed it is, to first listen to Queensrÿche), I took great pleasure in listening to on multiple occasions right off the bat. It is perhaps indicative of both the records enjoyability as a whole and the stand-alone ability of numerous tracks that this enjoyment involved both listening to the entire album on numerous occasions, and also my designating "Spreading the Disease" as my go-to song to listen to with headphones on my way to the shop, for many months. The record is a true meeting of vision, ambition and delivery of the finished product; a well-crafted and at times provocative exploration of the insidious below-board goings-on of modernity, perhaps as relevant now as it's ever been, and well deserving of a place among metals finer records.