In a time where a sizeable cohort of the contemporary death metal scene presents itself as an intellectual, artistic, and complex endeavour, Chicago's Bones offer a refreshingly puerile and un-trendy blast of gleefully subversive B-movie-esque evil. Instead of classical-woodcut style macabre scenes or the seemingly endless beige creations of Paulo Girardi industries, "Sons of Sleaze" instead greets you with a skeletal figure wielding a huge mace, and with a large serpent for a knob. If that's not a seal of quality, I have no earthly idea what is. Indeed, with such a pure aesthetic illustration of how the record sounds, following up such an observation with an actual review is almost surplus to anyone's requirements - but nonetheless, write one I shall. 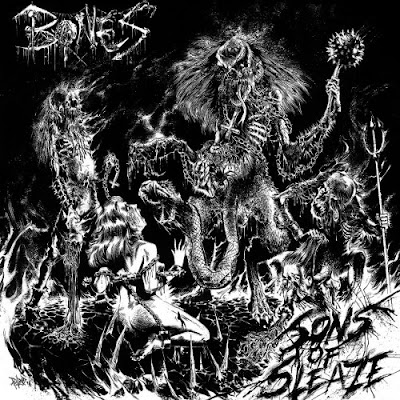 Bones are, as best I can tell without having done exhaustive research, something of an offshoot of stalwart black-thrash outfit "Usurper", with all three Bones members having either been in - or still being in - that band. Whilst Usurper offers up a rampaging first-wave style black-thrash attack, flailing like a drunken elephant with an enormous Celtic Frost tattoo, Bones themselves go down a filthier road. As befits the record's title, "Sons of Sleaze" is a work which does precisely what it says on the tin; vomiting out a thirty-something minute tidal-wave of sleaze-ridden nastiness. The short punchy songs are as energetic - and energizing - as they are vile, never outstaying their welcome whilst weaving excellently through the entire gamut of rocking and rolling atrocity. Bone-cracking d-beats riffs fry your brain and leave you as a succulent snack for the circling extreme-metal vultures; namely the crazed blast-beats and pulverising double-kick drumming which blows your face off, from the moment the record commences. Simultaneously, the frenetic and leering solos and hooks, along with the stomping slower sections lend the entire record a grinning grind-house swagger akin to bands like Detroit's Shitfucker, albeit, with no offence to the latter, offering a greater display of musical tightness - a sure demonstration that a record of this sort can be filthy, and can have buckets of character without being sloppy. Indeed, "Sons of Sleaze" impressed me on a pure-musicianship level more than one might expect from its aesthetics and generally rough, raw direction.

To say that the record is eclectic is something of an understatement, with a hefty sleeve of influences on show from Motörhead, Celtic Frost, and perhaps a little Autopsy thrown in along the way, especially in the slightly doomy sections which arise like the lethargic dead from their tombs. Alongside these, dozens of other old-school inspirations are on show, and all of it conducted in the best possible way, resulting in an album which for all of its diverse musical landscapes, is both cohesive and distinctive. "Sons..." is possessed with definite direction and a unity of spirit, through the full-range of truly unhinged extremity, punk-as-fuck vitriol and irresponsible rock n' roll sleaze. The entire album belongs together - no haphazardness here, despite its incredibly dynamic variation. Nor, equally importantly, is the record a cliched pastiche, as one might fear; instead, it is decidedly and uncompromisingly its own beast - a clone of nothing, and symptomatic of musicians with just as much imagination and vision as they have musicianship - showing off a love of the old-school, not a contrived desire to sound exactly like it. Its strong sense of character leaves the listener relishing it all the more. Furthermore, the production of the record really succeeds in bringing into flesh this entire evil vision, conjoining everything into a wonderfully cacophonous package with brain-melting lower end and a ton of bite in the guitars. The gnarliness carries on with the drums, recorded in such a way as to allow the listener to appreciate the physicality of the player and the kit itself; not some sterile isolation of drumming, with no context. In short, as with the album in general, you can saliently imagine it being played, and this gives it a real meaty organic appeal.


"Sons of Sleaze" is one of the most enjoyable death-metal records I've listened to in quite some time. Granted, it differs greatly from the archetypical works of the genre, but in so doing it offers forth such an inebriating and effective concoction of styles that it may be of interest to fans of just about any extreme subgenre. I'd certainly recommend it to just about any extreme metal fan, that much is certain. The record is an ugly and ragged parade of everything to love about the filthy side of metal, and you can't help but listen to it with a grin and feel stimulated by the sheer crudeness of it. All in all, I wish I'd heard of the band sooner.

A real highlight of recent death metal... or recent anything, for that matter. 9/10.