Stoner doom - and its more-or-less psychedelically inclined henchmen - amount to a sub-genre which, without overstating, there's a fucking lot of at the moment. Especially in the last half-a-decade or so, the swarm of artists playing it, or similar styles, has reached saturation point - not necessarily a bad thing - a genre flourishing, many would say... But likewise, the generic, the unadventurous and the derivative within doom are at something of a high-tide of late. Indeed, at times it reaches an extent enough to slightly turn me off the genre - or at least take a break and listen to something else. Not through any sort of elitism, you understand, but more an intermittent reluctance to believe anything especially exciting was being done - particularly in the more conventional realms. In a world where so many bands make something reasonable out of the established tropes of a sub-genre, it takes something that bit more special to make something great from those very same ingredients. That's where Windhand come in. 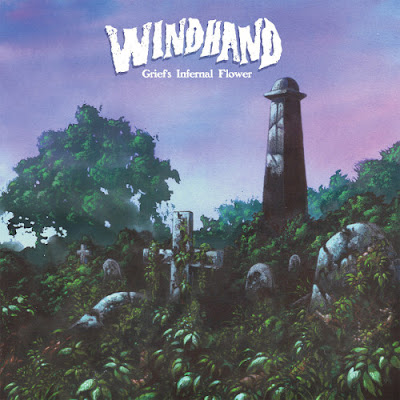 Windhand's new record "Grief's Infernal Flower" is as good a launchpad back into enthusiasm as anything else I've crossed paths with recently. How much the band re-invent any kind of wheel is debatable - their work is distinct in several ways, particularly the powerful, haunting and instantly recognisable vocals of Dorthia Cottrell - but likewise, the guitar-work borrows very overtly from the bible as written by the greats of the genre; particularly Electric Wizard. Many of the hooks, riff-styles and approaches to solo-playing are clearly following that line of influence - embodying stoner-doom tropes with great comfort indeed. However, as picked-clean that doom-bible might appear to be -  however many of its pages have been used for roach-cardboard over the years, there's still some good stuff left in there, and while, as hinted above, there's no wheel-reinvention going on, the band nonetheless comfortably carve their own sonic empire. "Grief's Infernal Flower" keeps a tight hold on the reeling, mournful banner of it's predecessor "Soma", whilst refining it into a record which is arguably a step up from it. Immediately memorable and potent vocal lines and patterns differentiate the character of separate songs with ease, casting the bands vast, ethereal and mournful atmosphere with greater clarity and focus; while still a sprawling and intoxicating soundscape, this one meanders less, and achieves more.

Tonally, Windhand have always had something special - and as the record demonstrates keenly, something which continues to ripen and blossom; the bruising and engulfing guitar-tone at once succeeds in being heavy to the point of being noteworthy, but likewise has a pleasant texture, and is something which can be enjoyed on that basis - some doom bands have a tone so filthy or distorted that enjoyment comes not from how pleasant it is, but how extreme. This is not the case here; the surreal and magical world of "Grief's Infernal Flower" - cold, awe-inspiring, melancholic - is absolutely complimented by the tone used - and indeed, more broadly complimented by the coming together of all the elements used. Nothing seems out of place - and while for the most part the record is quite a conventional one, it is in some way optimised - in some way honed and put together in such a way as to best capitalise, bringing together, fruitfully, elements not just of stoner doom, but a more sombre and sober side reminiscent of more traditional doom metal (the artwork itself is, by accident or by design, reminiscent of "Die Healing"), conjuring forth the intoxicating atmosphere not just - or chiefly - a narcotic haze, but the colder intoxication of the bare and captivating night-sky, all the while drawing the listener out of their body with a sincerity which other bands are often wont to squander.


The fact I can't think, off-hand, of any other 2015 stoner doom albums at this moment does not mean that's the sole reason I'm willing to consider "Grief's Internal Flower" one of the best of the year. The album is, beyond that, genuinely very good indeed. Time will tell, of course, but my satisfaction with the record over the last month or so of listening has been consistent, and I'm more than happy to label this record Windhand's best output yet.